Update: According to The Mirror, a second policeman has died from his wounds. 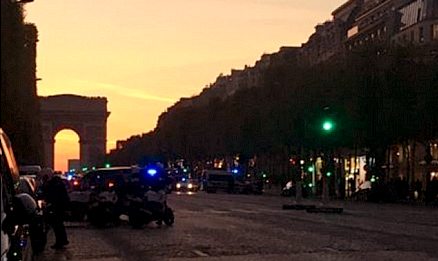 There was a terrorist attack on the Champs-Élysées in Paris this evening. One policeman was killed and another wounded, and one gunman was killed. It is thought that a second attacker may have been involved, and is still at large.

It must have been an extremist from the Front National who did it. I mean, France has strict gun control, so who else would be carrying a Kalashnikov on the streets of Paris except an FN guy?

Below is a report from The Daily Mail:

BREAKING NEWS: ‘At least two’ Kalashnikov-wielding terrorists kill one police officer and wound another in attack on Paris’s Champs Elysees

A police officer was shot dead and another seriously wounded by two Kalashnikov-wielding gunmen on the Champs Elysees in central Paris tonight.

French police said that the incident was probably a ‘terrorist act’ and the world famous avenue was on lockdown by 9pm.

Heavily armed officers had flooded the area and a third individual – believed to be the killer – was killed, according to police sources.

Reports suggest ‘at least’ two people were involved in the attack which took place as presidential candidates took part in a TV debate nearby before Sunday’s election.

The Interior Ministry spokesman said on BFM TV the officers were deliberately targeted and the police union added that one of them was shot dead while sat in a car at a red light.

There are reports the second gunman who remains at large has fired shots in a shopping mall. Police in body armour and riot gear are on scene.

A witness identified only as Ines told BFM that she heard a shooting, saw a man’s body on the ground and the area was quickly evacuated by police.

The attack came three days before the first round of balloting in France’s tense presidential election.

It comes just two days after police arrested two men in southern Marseille with weapons and explosives who were suspected of preparing an attack to disrupt the first-round of the presidential election on Sunday.

21 thoughts on “Paris in the Spring — With Automatic Weapons Fire”