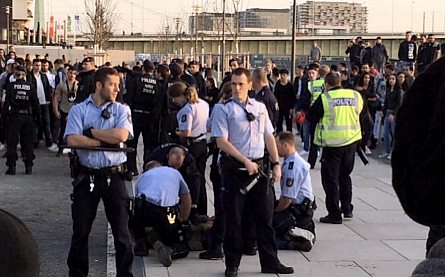 Culture-enrichers battled each other yesterday evening in two separate incidents in Germany. The first was along the Rhine in Cologne. In this story the ethnicity of the combatants is not mentioned directly, but the photos make it clear what sort of “Germans” were involved in the fighting.

Police out in force

Several injured in mass fight at the Rhine Riverside

Cologne — Several companies of a hundred police each were deployed: a mass fight on the Rhine Boulevard in Cologne caused upset. There were injuries and arrests.

Late Sunday afternoon, 500 mostly young people were on the Rhine riverbank near the Deutzer Bridge. They were enjoying the wonderful spring weather.

Around 7pm there was sudden turmoil. Several persons came into conflict with each other; fists flew. The situation escalated. Police moved in immediately. “Up to 50 persons were involved in a fight,” a police spokesman explains.

The officers separated the fighting persons. Arrests were also made. Police are not able yet to give specifications about the background and the participants.

8 thoughts on “Die Schlacht am Rhein”