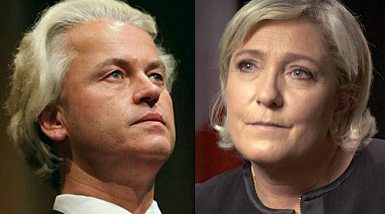 If Wilders comes, can Le Pen be far behind?

PEGIDA’s Press Nemesis in Saxony is nervous about Geert Wilders.

From Sächsische Zeitung, translated by JLH:

Europe is Trembling With Fear At the Dutch Election

The Dutch election is not just about the right-populist Wilders. The future of Europe is at stake. A win for the EU opponent could be the overture to a much greater disaster.

Geert Wilders has little sympathy for the European Union

Europe and the Netherlands. It has long been a ticklish relationship. Just a year ago, Prime Minister Mark Rutte suffered a severe defeat when the EU agreement with Ukraine was rejected in referendum. Now the campaign of the right-populist Geert Wilders — admired by like-minded Germans in the AfD — is stirring things up against the EU. Europe and Germany, too, have something to worry about.

Of course, polls indicate that the parliamentary election on Wednesday will change little in the leadership in the Hague. The probable scenario is that Rutte will stay. Most recently, his right-liberals were first with 16%, leaving Wilders and the Party for Freedom behind. Nonetheless, politically, Wilders is herding the moderate Rutte along. Since he made points with fundamentalist opposition to Brussels, Rutte too has been shying away politically from Europe.

This was demonstrated by a vignette on the margins last week in Brussels. The 28 heads of state were analyzing the situation in the western Balkans, which the EU would like to bind to itself instead of leaving it to the influence of Russia or Turkey. But there could be no draft proposal for the entry of other states, thank you very much. A bigger EU would not be good for Rutte’s campaign.

His EU partners went along without complaint. No one wants to turn a founding member into a shaky candidate. Outside of that, beyond the Netherlands’ elections — like a grim version of the domino theory — a potentially greater disaster is conceivable: a win by the right-populist Marine Le Pen in the French presidential election. That would be “the end of Europe as we know it,” said the French-born EU commissioner Pierre Moscovici recently to Zeit.

Even if it does not come to that, a decent political result for Wilders and Le Pen could shake the European landscape right up until the September election. That is, it could give the presently weakened AfD wind in its sails.

Tense and concerned, Germany too is watching the elections in the neighboring land. Except for the AfD, no one would rejoice at a Wilders success. Frauke Petry — by no means unchallenged — sought a show of solidarity with Wilders and Le Pen in January and found it in a common event in Coblenz.

At any rate, in the case of a massive defeat of the PVV, the AfD runs the risk of being pulled down, too. Polls for them have soured in recent weeks, since the entry of the SPD candidate Martin Schulz. Intra-party strife surrounding right-extremist Björn Höcke has contributed to this.

Chancellor Merkel has shown herself to be unruffled by the elections in the Netherlands. If the right populists in Europe all lose in popularity, she may feel confirmed. If Wilders and then Le Pen grow stronger, her chances for another term will not depreciate. The stronger the AfD, so much fewer are the ways that lead to a continuation of the great coalition after the parliamentary election on September 24th.

The elections in a large member state like Germany are also of central importance for the EU this year. Until then, nothing much will happen on European territory. Greek debt, Italy’s demands, the disagreement with Poland. Until then, Merkel will avoid anything that might decrease her election chances.

20 thoughts on “Be Afraid, Be Very Afraid”