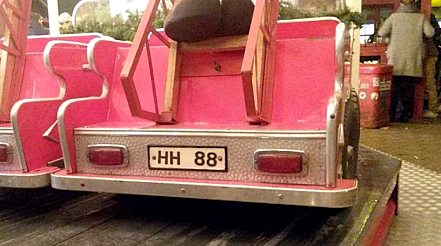 Nobody gets the Screaming Nazi Heeber-Jeebers worse than the Germans. Anything that refers — or seems to refer — to Hitler, Nazis, Aryans, the white race, etc., etc. causes an instant uproar and consigns the referrer to the Outer Darkness for the rest of his life.

Below is an article about the controversy in Hamburg over a fire engine in a children’s carousel with a suggestive license plate number. Nash Montana, who translated the piece, includes this introductory note:

Achtung! Nazis are up to their old tricks again in Germany! Two weeks ago it was the covert Nazi codes in an EDEKA grocery store advertisement. And now a small fire engine that could, and a children’s motorcycle in a carousel on the Christmas market in Eimsbüttel — they’re up to no good!

The translated article from the Hamburger Abendblatt:

Children’s carousel with Nazi codes? District politicians in a tizzy

Did a small fire engine drive with dangerous Nazi symbolism at the Christmas market in Eimsbüttel? The Left demands consequences.

Hamburg. The historic children’s carousel at the Christmas market on Osterstrasse has become a case for district politicians in Eimsbüttel. Specifically, one small fire engine and one children’s motorcycle that sport suspicious license plates, among all the other vehicles on the carousel.

Let’s start from the beginning: The nostalgic fire engine has for years apparently been sporting the license plate “HH88”. The small motorcycle shows an “88” on its plate. Within Nazi circles the “HH” does not stand for Hansestadt Hamburg, it stands for the Hitler greeting. And as for the double 8, the eight letter of the alphabet is the H. And when a concerned Eimsbüttel citizen discovered the number/letter combination on the mini-fire engine and the mini-motorcycle, he diligently photographed the offending numbers and letters, and reported it all to the proper authorities.

This has been confirmed by Arlette Andrae, one of the organizers of the Christmas market on the Fanny Mendelssohn Plaza. “We are glad that there are alert citizens who discover things like that. We immediately informed the owner of the carousel, and he immediately removed the offending license plates.”

But this is not the end of it: The Eimsbüttel Left fraction wasn’t happy with the mere removal of the offending license plates. They have filed with the district for an inquiry and want to find out if this was a previously known problem. If yes, since when and what consequences this would have? If no, what conclusions will the district administration draw from this for the future? And for the Left it is especially outrageous that the lady the plaza is named after, Fanny Mendelssohn, is a world=famous Jewish musician, as a press release from the left fraction says.

The owner/operator of the carousel, Hans-Heinrich Dieckmann from Handorf, Lüneburg district, was taken by complete surprise when he learned the information that his carousel had developed a district-wide Nazi reputation. “First off, I was so shocked,” says Dieckmann to the Abendblatt. “Then I almost had to laugh. That just can’t be true.” This is a historic carousel that was built in 1957. “For almost sixty years this small fire engine was riding unnoticed on the carousel with the same license plate at many fairs and markets. I never once connected the license plate to Nazi symbolism. I don’t even know such things.”

Of course he immediately removed the offending plate on the fire engine. The motorcycle with the number 88 is a newer model that was delivered from China recently with the number 88. “I can’t even imagine that the Chinese would work with Nazi symbolism.” And of course, he quickly painted over that number as well.

Hans-Heinrich Dieckmann is hoping that this matter is settled now. But for the Left fraction in Eimsbüttel, it is not: “The administration should act immediately and should pressure the organizers to terminate the owner/operator of the carousel”, says Peter Gutzeit. “Covert Nazi symbolism, especially at a place with Jewish relevance, and additionally with a children’s carousel — such a thing has to be punished by withdrawal of the license to operate.”

Two weeks ago, an EDEKA grocery store advertisement caused a stir across Germany. It showed a car with the license plate “MU-SS 420”. The combination “SS” is forbidden in Germany due to its connection to National Socialism. And in the second plate that was shown in the spot, “SO LL 3849”, experts also saw covert Nazi codes — one because of the combination of “84” (Heil Deutschland) and two because the numbers 3 and 9 put together stand for the right-wing extremist movement “Christian Identity”.