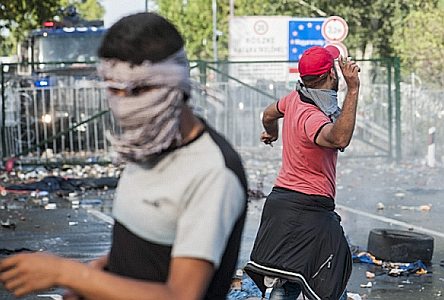 Ahmed H. was one of the ringleaders of the mob of terrorist migrants who tried to storm the Serbian border with Hungary in September of last year (see “Free Ahmed!”). Poor, poor Ahmed was recently sentenced by Hungarian court to ten years in the slammer, and the Gutmenschen of Hungary and elsewhere are appropriately outraged on his behalf.

CrossWare has translated an op-ed about the leftist uproar over Ahmed H., and includes this introductory note:

There are all kind of names people call those Liberal-Leftists who have completely lost their minds and are obsessively drenched in Islamophilia and loving mass migrations and migrants. The Germans call them gutmenschen. The Hungarians call them “migrant petters — people who love to pet migrants”.

The translated article from the Hungarian daily Magyar Idők:

From Migrant Petters to Terrorist Petters

The Left found another “infringement of the law” and “a scandal”: the organizer of the violent border violations in Röszke last year (Battle of Röszke) was charged with terrorism and was sentenced to ten years in the court of first instance.

The protesters — from the Index.hu and 444.hu portals [both proven Soros outlets — translator], an observer from the Amnesty International, a journalist from The Guardian and “civilians” — found the punishment too draconian and question whether the perpetrator even committed any terrorist acts. Index.hu suggested that simple rock-throwing was construed as a terrorist act by the court.

Because of the alleged breakdown of the rule of law in Hungary, the whiny liberals of the left never fail to challenge the judgment of an independent Hungarian court if it does not meet their taste.

How can a judgment be fair if they do not find it so? How could anyone think that the decision of the court was not ordered by the people in power, or arrived at due to political pressure, if the verdict does not match left-liberal political goals?

The definition of terrorism is in accordance with Hungarian law and the decisions and directives of the United Nations and the European Union.

If someone wants to force an action, or failure to take an action, by any public/state actor, that is a matter of terrorism, for example.

The violent breakthrough of the state border in groups and the threat of physical coercion of the police are included. The perp was accused of stirring up the crowd, and he also took part in throwing rocks at police officers.

How are they falsifying the facts in the left-liberal press?

Index.hu states the man just “talked into a megaphone, and anyway he was only accompanying his elderly parents as they were ‘fleeing from war’, so he can bring them to safety.”

This motive shows up in the 444.hu report, too: “He wanted to help his elderly parents get onto the territory of the European Union for their safety.” But why did Ahmed H. — who had been living in Cyprus for ten years previously — want his parents to arrive into safety across the Hungarian-Serbian border using violence to break through? Why not in Cyprus? Why were they not safe in Serbia? According to the deputy director of Amnesty, Gauri van Gulik, Ahmed did not try to stir up the crowd. Just the opposite — he attempted to create a dialogue between the public and the police. In Arabic, obviously, because on the video footage everybody can hear how he was encouraging the crowd.

“Knowing what we know, this judgment is a mockery of justice,” said Van Gulik. Really, how dare the court establish facts other than the ones provided by Amnesty International?! “Today a father was sentenced to ten years in prison, whose only purpose was to accompany his elderly parents and see his family safe in Europe. Throwing rocks and irregular border crossings are not equal to committing a terrorist act,” he said.

According to Amnesty, escorting people to Europe is inevitable, without firing up people with a loudspeaker to break down the border fence, threatening and throwing rocks at the police. And afterwards, if you manage to run through the border, it is only irregular border crossings.

The petting of migrants will unavoidably lead to the petting of terrorists. Uncontrolled mass immigration in so many countries is linked so many times with illegal, violent deeds that one can not speak of one without the other.

Those who support uncontrolled immigration must somehow make it insignificant and justify the violence. To give an example this is not so different in the United States.

At the University of Ohio, using a vehicle and a butcher knife, a fellow Somali jihadist “refugee”, Abdul Razak Ali Artan, committed an attack was shot by a white police officer.

Concerning the incident, a Texan Democrat representative, Sheila Jackson wrote: “Another sad day in our country. It was a senseless shooting at the University of Ohio.” And another liberal called it racism, that the prompt response of the white police officer was praised and he was called a hero.

Even during his election campaign, Donald Trump drew attention to the security risks associated with the Somali “refugees”, and for that he was called a racist by the mayor of Portland, and the mayor of Minneapolis called him an Islamophobe.

10 thoughts on “From Migrant Petters to Terrorist Petters”