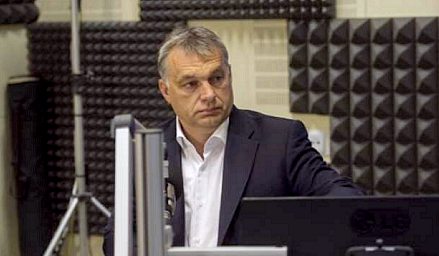 Hungarian Prime Minister Viktor Orbán appeared recently on a Hungarian radio program to discuss his immigration policies, which are the opposite of the EU’s. He also talked about domestic political issues.

Many thanks to CrossWare for translating this report from Napi Migráns:

Orbán: I would like to know if someone who wants to enter the US illegally would survive that?

From the show “180 minutes” on radio channel Kossuth

Prime Minister Viktor Orbán believes ”The Nations of Europe starting to wake up”, and figured out that the migration is a cultural issue: “their identity is endangered”.

We can’t expect help from Brussels. The problem must be dealt with by the nation states, just like Hungary did, said the Prime Minister on Friday on the radio Kossuth show “180 minutes”

He called attention to the fact that the unlawful, unreasonable and unfair European quota system — which was opposed by Hungary — “has grown into even a bigger danger”, because they want to modify it into a permanent mechanism to distribute newly-arrived migrants.

“We absolutely will not accept this!” said Viktor Orbán, and he also said: It is not part of EU membership that anyone — against the will of Hungary — can decide that Hungarians must accept illegal masses.

He also asked the question: who and when was it voted in Europe to admit millions of illegals and distribute them all around?

No such decision was made in any elections, so what is happening now has no democratic basis, he said. Then he added: “In today’s organized lawful EU we are approaching a chaotic, anarchic state, because many leaders naturally accept the state of lawlessness.”

The PM included the increase of terrorism as one of common dangers in Europe, as he phrased it: ”With terrorists, even one is too many,” as well as the question of public safety. Referring to the latest news, he stated: we are in danger of “letting in, or even inviting in the internal conflicts of the Middle East to the EU.”

On deportation the Prime Minister confirmed: the Hungarian view is that nobody can deport migrants back to Hungary just because they were registered here — but as the law states — the place where they first stepped into EU soil. That is Greece, which country playing a key role in the migration crisis, as they are not defending their southern borders.

According to Viktor Orbán the flood of migrants — which he calls an “invasion” — is partly enabled by the network of human smugglers, and also the activists who “support everything that can weaken the nation states.”

This Western mentality and activist network are best represented by George Soros, he commented, and added: The activists helping the migrants are becoming — perhaps unwittingly —illegal networks of international smugglers.

He further submitted that “a pressure of opinion is building up in Europe,” so politicians are afraid even to say anything about a different concept. “The word ‘fence’ can’t be spoken,” he brought up as an example.

By responding to the critical words of US Ambassador to Hungary Colleen Bell [Ex-soap opera producer and Obama’s henchwoman — translator] towards his cabinet, the PM reacted in with the following: “These are pure imperial interests”.

The United States does not support the immigration policies represented by Hungary, he said.

The speech of the American Ambassador to the UN in New York very clearly showed, he continued, that it is not against America’s interest to let Europe flooded with millions of migrants arriving directly from war zones.

“While this is not against their interests, but I would like to know if someone wants to illegally enter to the US would survive that? I doubt it,” said Viktor Orbán, who noted that if Hungary were to do only half of what the United States does — where they build fences, walls and they have “weapons ready” — then ”they would lose their cool about us.”

[Obviously the Hungarian PM has never crossed the southern border of the US illegally, otherwise he would have known about that organized chaotic farce what is happening there, so obviously painful for so many US citizens. But it is not his job to know these facts, just like it would not the US government’s job to “educate” other sovereign countries about their policies as part of their “exporting of democracy”. — Translator]

Concerning domestic policy and national economic questions, the Prime Minister talked about the success of the Hungarian reforms [Hungary kicked out the IMF, once they paid back loans taken out by the Socialists and applied economic policy — which is surprisingly similar to Donald J. Trump’s plans. — Translator]. Since the collapse of the communist system, this year has the highest percentage of employment in Hungary, but as he phrased it, he is still looking for new and better tools to increase this number, and planning to add at least half a million people (5% of total population) to the workforce. Among the opportunities he mentioned were simplifying and decreasing the tax burden administrative complexity on small and middle-sized companies. He also plans to increase incomes (by decreasing taxes) and renew the construction industry by providing opportunities to build more new homes.

Finally the PM spoke about questions concerning state-owned agricultural lands. He said the laws are very clear: a person can only own a maximum 300 hectares of land.

The question of land, he explained, we look at as part of our sovereignty: “We are only safe when the farmers own their land, and we must stop any speculation — while respecting EU laws — to let foreigners get their hands on Hungarian agricultural lands.” He believes that if the politics of the Socialists had continued with their pocket contracts, half the country would have belonged to foreign powers.