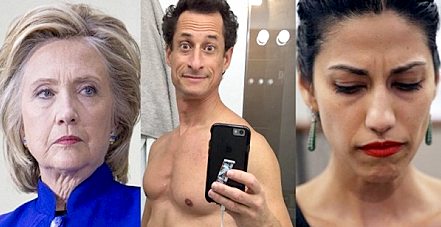 I admit it: I’m one of the millions of Americans with an addiction to the Hillary-Huma-Weiner news that dominates the headlines these days. The situation is exploding so fast — if only it could be run in slo-mo, so we could watch the fragments of Hillary Clinton’s campaign spinning lazily end-over-end through the autumn air.

The following report is from True Pundit. I have no idea how accurate it is, but it makes for fascinating reading.

One thing that stands out in this and other news reports is the sheer stupidity surrounding the handling of emails and the use of mail servers by everyone involved. Considering Hillary’s reputation as the second-greatest evil genius in the world (George Soros being #1), her acumen concerning email security is less than abysmal.

And this is the woman who may be our next president…

Or maybe not. Read the skinny from True Pundit to see what may be in store for Ms. Rodham between now and Inauguration Day, courtesy of the NYPD:

New York Police Department detectives and prosecutors working an alleged underage sexting case against former Congressman Anthony Weiner have turned over a newly-found laptop he shared with wife Huma Abedin to the FBI with enough evidence “to put Hillary (Clinton) and her crew away for life,” NYPD sources told True Pundit.

The NYPD seized the computer from Weiner during a search warrant and detectives discovered a trove of over 500,000 emails to and from Hillary Clinton, Abedin and other insiders during her tenure as secretary of state. The content of those emails sparked the FBI to reopen its defunct email investigation into Clinton on Friday.

But new revelations on the contents of that laptop, according to law enforcement sources, implicate the Democratic presidential candidate, her subordinates, and even select elected officials in far more alleged serious crimes than mishandling classified and top secret emails, sources said. NYPD sources said these new emails include evidence linking Clinton herself and associates to:

NYPD detectives and a NYPD Chief, the department’s highest rank under Commissioner, said openly that if the FBI and Justice Department fail to garner timely indictments against Clinton and co- conspirators, NYPD will go public with the damaging emails now in the hands of FBI Director James Comey and many FBI field offices.

“What’s in the emails is staggering and as a father, it turned my stomach,” the NYPD Chief said. “There is not going to be any Houdini-like escape from what we found. We have copies of everything. We will ship them to Wikileaks or I will personally hold my own press conference if it comes to that.”

The NYPD Chief said once Comey saw the alarming contents of the emails he was forced to reopen a criminal probe against Clinton.

“People are going to prison,” he said.

Meanwhile, FBI sources said Abedin and Weiner were cooperating with federal agents, who have taken over the non-sexting portions the case from NYPD. The husband-and-wife Clinton insiders are both shopping for separate immunity deals, sources said.

“If they don’t cooperate they are going to see long sentences,” a federal law enforcement source said.

Both NYPD and FBI sources confirm based on the new emails they now believe Hillary Clinton traveled as Epstein’s guest on at least six occasions, probably more when all the evidence is combed, sources said. Bill Clinton, it has been confirmed in media reports spanning recent years, that he too traveled with Epstein over 20 times to the island.

According to FBI sources, the bureau’s newly-minted probe into Clinton’s use and handling of emails while she served as secretary of state, has also been broadened to include investigating new email-related revelations, including:

Because Weiner’s campaign website is managed by the third-party consultant and political email guru, FBI agents are burdened with the task of trying to decipher just how many people had access to Weiner’s server and emails and who were these people. Or if the server was ever compromised by hackers, or other actors.

Read the rest — including details on who may have had access to Hillary’s classified State Department emails — True Pundit.