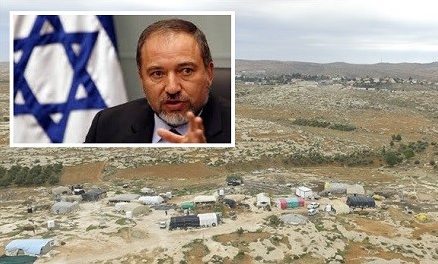 We all know what the Obama administration thinks about illegal settlements in the West Bank. There’s no greater crime than building new settlements in “The Territories”.

Unless they’re illegal Arab settlements. That’s a different matter — those must be protected at all costs. Dismantling them would be a grave crime against humanity and a violation of international law and etc blah yak.

Israeli Defense Minister Avigdor Lieberman (photo inset) will probably present his ministry’s formal reply before the Supreme Court. This is the reaction to the proposal of the leftist NGO “Rabbis for Human Rights,” which demands an end to the demolition of an illegal Arab settlement. A series of buildings of the illegal settlement (photo) near the Jewish village Sussiya in the vicinity of Hebron is slated for demolition.

Tuesday, despite the warnings, forces of the civil administration destroyed a number of illegal structures in the neighboring city of Umm el-Keir, which had been built along the security fence of Carmel. Some of these buildings had been built with the support of the European Union.

In addition to the USA, the EU and the UK have joined the effort to prevent the destruction of the illegal Arab settlement near Sussiya.

In 2013 a court decreed that Arab construction at that location be halted. This happened pursuant to a proposal of the NGO organization, Regavim, an NGO which monitors illegal Arab construction throughout Israel. A year later, the court issued the demolition order for buildings already constructed at the location. In 2015, the supreme court rejected a petition for temporary suspension of the demolition order and gave a green light for its execution by civil authority.

On Wednesday, Regavim published a statement which disregarded the threats of the American officials and called for the Israeli Defense Ministry to issue the orders for execution of the act. “We call on Defense Minister Avigdor Liberman to ignore the inappropriate foreign meddling in domestic Israeli affairs, which belittle the government of Israel and the Israeli justice system. These are idle threats, provoked by radical, leftist organizations who do not respect the laws and repeatedly abuse the legal process of the supreme court.”