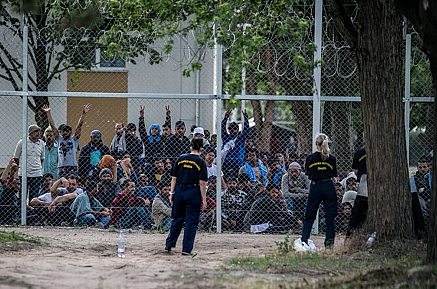 When Angela Merkel invited the entire Middle East into Europe last summer, the first wave of hundreds of thousands of “refugees” passed through Hungary on their way to Austria and Germany. Prime Minister Viktor Orbán was adamant that Hungary would not remain a transit point for the migration, which violated the Dublin Regulation on the disposition of immigrants who cross the outer borders of the Schengen Zone. He asked parliament to order the building of a fence to seal off the border, which it did, first along the Serbian border, and then along the Croatian one.

The flood of migrants into Hungary was thus reduced to a tiny trickle, but the Hungarians were left with some thousands of “refugees” that had to be accommodated and processed. The Kiskunhalas Refugee Center, located in southern Hungary near the Serbian border, is one of the facilities that houses the migrants while their asylum applications are processed, after which most of them will be deported.

The inmates in the Kiskunhalas center are unhappy with their conditions, and have recently been agitating for changes, the most prominent of which is that the center should be opened up, granting them freedom of movement. The latest news stories say that some of the migrants were threatening to jump from the roof of the center if their demands were not met.

The report below is from the Hungarian government news site’s English-language service:

On Wednesday evening György Bakondi, Chief Security Advisor to the Prime Minister told public television channel M1 that more migrants in the Kiskunhalas reception centre have threatened to jump out of the building if authorities do not open the camp.

Mr. Bakondi said that three migrants of Arabic origin were standing in the second floor window and are making their threats from there.

Earlier on, two migrants of Syrian and Iraqi origins respectively climbed onto the rooftop of the reception centre demanding the opening of the camp. They were being watched by some 150 fellow migrants. The two men threatened to jump off the roof if their demands are not met; these two protesters have already been brought down from the rooftop. Their requests for asylum have already been rejected, they are awaiting their deportation from Hungary, Mr. Bakondi explained.

He added that these two men have made cuts on their arms and chests, they will receive psychological treatment.

The Chief Security Advisor also discussed the illegal escape of five Algerian and two Moroccan migrants that took place on Tuesday evening. He said that five of the men have already been caught, two are still being searched for.

The migrants got to the rooftop, descended from there and left the camp through the fence, he said and added that it is due to the escape that it is examined what kinds of further potential security measures need to be introduced in the reception centre.

15 thoughts on “Unrest and Escapes at the Kiskunhalas Refugee Center”