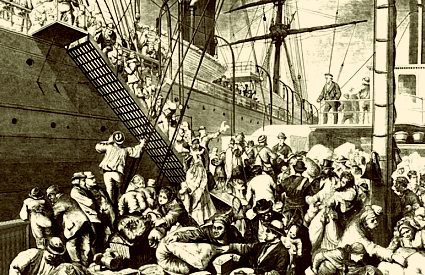 JLH has translated an academic article about the history and literature of German emigration. The translator includes this introductory note:

And now, as Monty Python used to say, for something really different: A paper by a German teaching at Stanford, given at a symposium held in Berlin on the 4th of July by the Neue Zürcher Zeitung on the subject of emigration instead of immigration. The combination of who is leaving and who is coming, when you think about it, could be deadly.

Immigration makes people uneasy and has a massive effect on policy. But no one talks about emigration, which is quantitatively just as significant. Germany fears being overwhelmed by foreigners, but for years has been exporting people en masse. Wilhelm Furtwängler once wrote: “The question ‘Why did I stay in Germany?’ seems strange in the mouth of a German.” That isn’t so. German history has taught us how normal this question is. At the same time, Furtwängler’s reaction is symptomatic of the change in Germany’s dealings with migration. Immigration is perforce the topic. Emigration is habitually downplayed.

In 2009, 733,000 people left Germany (156,000 of them were German citizens). The number of immigrants comes to 721,000 (114,000 German citizens). One of these statistics unsettles policy, drives citizens to the streets and pays Thilo Sarrazin’s rent. The other one is absent in public discourse. Germany is afraid of being overwhelmed by foreigners, but has been exporting people en mass for centuries. No feuilleton section fails to touch on the concepts of “adopted land” and “citizen of the world” and yet the land generally disallows foreigners the possibility of making Germany their home. There is a discrepancy here that deserves explanation. Emigration is not invisible, but the it is undervalued, while immigration is over-accentuated.

Three cases in point: First, the political unification of Germany in the 19th century has as its transatlantic counterpart the “ethno-genesis” of German-Americans, who constitute by far the greatest proportion of the population in the Middle West, in California and in parts of Texas — much to the annoyance of the Anglo-Saxon population.[1] Anti-German editorials and political campaigns of the time anticipate the rhetoric of Donald Trump.

Second, after two world wars, after banning of German-language schools and newspapers, after prohibition, after name changes and great regional dislocations, people of German heritage are still the largest ethnic group in the USA. But they are as good as invisible. And there is still a brisk immigration stream to the USA. In Silicon Valley, there are two German schools and another in San ‘Francisco. In internet enterprises, Germans are everywhere to be found.[2]

If the Germans in the USA were the Mexicans of the 19th century, they are the Chinese of the 21st century in Switzerland. The number of German citizens here has more than trebled from 1995 to 2015. Highly qualified people especially are moving to this Alpine land, which is the favored destination for emigrating Germans. While the Swiss like to see themselves as the victims of an oncoming [immigration] avalanche from the north, the process is not without historical precedent. In 1914, there were over 200,000 citizens in Switzerland, and, since Switzerland had a small population, Germans at that time made up 6% of the population. Today, it is 3.4%. Nonetheless, Germans have become a political issue.

Third, Pacific Palisades — the “Weimar on the Pacific” — showed how emigration influenced the most accomplished of those who had left the homeland. The intelligence assembled on the California coast — Thomas Mann, Theodor Adorno, Arnold Schönberg, Bertolt Brecht — functioned after WWII not only as the conscience to the two German successor states, but as exoneration of the Weimar Republic. Collected together under the palms was everything from the first German republic that was later fondly remembered by the GDR and the FRG. When the exiles returned to Germany, they represented a cosmopolitan concept in contrast to the post-war stodginess. In a speech, Adorno told how Charlie Chaplin had mimicked him — “the greatest honor of my life.” Pacific Palisades signified the closing of ranks with an international moral community in which the Brit Charlie Chaplin could meet the German Adorno at a California party.

So why is the German diaspora comparatively invisible in its homeland? Of course, there is the Emigrant House in Bremerhaven, there are documentary films and commemorative tablets. But compared to new arrivals, little attention is paid to those departing. On the one hand, this is surely because emigration over time is characterized by its diversity. In Germany, there is no uniform culture of emigration as there is Ireland or Italy.

What Kind of a Nation Are We?

On the other hand, for a long time, the diaspora was not running parallel with nation-building — Germans were emigrants with no monolithic country of origin. German settlers, sailors, dealers, soldiers circulated with no government sanction, often under another nation’s flag. In their peregrinations around the world, German emigrants resemble the Chinese and Indians more than the Dutch or Portuguese.

I am just baldly throwing out this comparison because I think that emigration posed this elementary question: What kind of a nation are we? Mass emigration is accompanied by a certain shame. Think of the drastic brain drain. When these ideas are applied to Germany, they resonate with a crisis of the German conception of self. Where does Germany belong? Is it a dream destination, or a perpetual donor country like Greece?

The Why of leaving or staying has never had to do only with economic factors, but was always overlaid by moral considerations. Think of the exchange between Thomas Mann and Wilhelm Furtwängler in 1947. For Mann, not leaving was a moral failure; the home left behind was foreign country: “Where I am, German culture is.” Furtwängler on the contrary maintained he had not wanted to “leave Germany in its greatest distress.”

Betrayal of the Nation

In 1830 and 1848, the most politically progressive people left the land. Conservative and nationalist voices attempted to interpret emigration as treason. During WWI, Hermann Hesse admonished his countrymen from Switzerland, “O, Freunde, nicht diese Töne.”[3]

This moralizing continues unchecked today. The emigrant docu-soap “Goodbye Deutschland” has been running on Vox‘s evening program since 2006. Every episode unabashedly presents emigrant stories as didactic pieces. In the first act, the emigrants-to-be in their row house in Bottrop or Pirmasens complain about German fastidiousness and dreariness. The third act shows them after a half year at their desired destination where in the normal course of events, they are lamenting the sloppiness and grime of their new home. The moral seems to be: wanderlust is a kind of German provincialism. The purely notional plan to flee overseas is a part of life here.

At any rate, the province and the wider world are tightly entangled in emigrant discourses. When, in Karl May’s novels[4], Old Shatterhand is constantly encountering Germans abroad, usually “even Saxons,” there is something cutely provincial about it, but also something close to documentary. These people did exist. May’s tales suggest that you could see how their life is, and then return to Dresden and write novels about it. Toward the end of the 19th century, that was still somewhat fantastic. Was this the fulfillment of a yearning that is no longer imaginable for us? How many young readers may have thought of a great-uncle who moved to Australia? May seems to have dreamed of a quasi-emigration — a going away that always has the homeland in mind. This idea seems to have something very calming — it is the norm in German culture today. TV personalities spawned by the TV series “Goodbye Deutschland”, like Konny Reimann, are reality television versions of a type otherwise mostly encountered among German intellectuals — the German who produces and directs his own emigration for consumption by the German public.

I assume you can think of some name or other in addition — German authors whose feuilleton picture can be placed in London or New York. And what the featured person gets from this is obvious: a touch of the exotic, something more ennobling than the odor of the barnyard. But clearly the public in the homeland gets something too: the satisfaction of seeing that the departing person, while saying nothing but farewell, is still looking back. Mr. New-American or Londoner-By-Choice has not quite closed us off. This phenomenon is rather German. It caters to the desire to strip off German-ness on the nude beach of the cultures, but also the even more pressing desire to report this back home in great detail. We all want to be deprived of our sleep by Germany, but preferably in French beds.[5]

And add to this that it is not necessary to strip off German culture to put down roots elsewhere. For Germans have taken whole centuries explaining to humanity that German culture — from Beethoven to kindergarten — belongs to the whole world, is detached from ethnicity. There is no German-ness that can be that easily exported — except perhaps for export itself. I close with this thought: Perhaps, in the silence about emigration, two modes of national self-recognition are face-to-face. Germany is only too happy to see itself as the hard-pressed middle of Europe which — as expressed in Heidegger’s Introduction to Metaphysics — is being crushed in the pincers between Russia and America. And this vision is superseded by another, even more uncomfortable one: Germany, the world champion exporter, indefatigably spewing ideas, products and people into the world.

Adrian Daub is Professor in the Department of German Studies at Stanford University. This essay was his paper at the NZZ symposium in Berlin on July 4, 2016 on the subject “Emigration-land Germany”