The well-known writer and former Soviet dissident Vladimir Bukovsky has published an op-ed on Brexit, written for the Ukrainian publication Gordon. Mr. Bukovsky, who now lives in London, has a few choice words for Ukraine concerning its eager desire to join the EU.

The translated version was published earlier today at Diana West’s website. Many thanks to D@rLin|{ for the translation:

Bukovsky: As soon as Ukraine got rid of USSR’s yoke, it started asking to join the EU. This is incredibly dumb!

The EU — a huge and insanely expensive bureaucracy, like the Soviet Union was. Great Britain finally understood that and voted to leave the EU, which is doomed to fail. So thinks the author and journalist Vladimir Bukovsky, who has lived in England for the past 40 years. In his “Gordon” column, the former Soviet dissident explains why everyone, except Russia, will benefit from the fall of the EU. 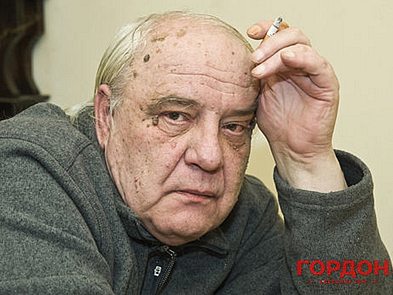 Vladimir Bukovsky: Ukraine should concentrate on its own economy instead of crying about the EU crisis. You cannot live on credit — it is madness!
Photo: Felix Rosenshtein/Gordonua.com

EU membership costs Britain 60 billion pounds each year! At the same time, Brussels constantly instructs us how to live.

During the past 15 years, I voiced many times my support for leaving the EU. I am, of course, very happy with the referendum results, where almost 52% of citizens voted for leaving the EU. Why am I happy? Because the EU is a huge and insanely expensive bureaucracy, reminiscent of the USSR. A system hostile to its people. People finally realized that and voted accordingly.

The EU, the monster that it is, took away the rights of the citizens of Great Britain, trying to turn us into a province. The EU is governed by decrees, not democratic principles, and a long time ago turned into a mindless socialistic structure that costs an enormous amount of money to sustain. According to the most modest calculations, EU membership costs Britain 60 billion pounds a year! At the same time, Brussels constantly instructs us how to live, what to do, which laws to pass, trying to dismantle the English judicial system.

Many would claim that those who voted “Leave” were mostly ill-educated citizens on welfare. This is nonsense and a lie! Those who say so are EU bureaucrats, running a campaign of disinformation! In fact, for a long time we had a stable 60% of Britons who wished to leave the EU. That in the end this number became 52% is the result of a yearlong campaign of propaganda and frightening the voters: if you leave the EU, your economy will crash; you will not be able to sell your products and services.

If Great Britain votes “Leave”, it does not mean that it will leave the EU tomorrow. The procedure will take about 5 years, so there will be no sudden changes. Even though stock exchanges went down, do not worry; they will stabilize and go up in a year. I assure you. England will gain greatly from “Brexit”!

I have read that the “Kremlin Lobby” influenced the referendum’s results. This is nonsense, too! The Kremlin had nothing to do with it; Britons voted according to the realities of their life. We are perfectly able here to see for ourselves that the EU is an insane undemocratic machine, which ruined our lives.

If you think the Russian government has an active role in Europe’s breakdown, you are mistaken. Understand — idiots, uneducated low-level KGB officers, who do not know anything, govern the Kremlin! They did not notice the signs of the breakdown of the USSR under their noses; for them it was a geopolitical catastrophe. Meanwhile we, the dissidents, talked of a USSR breakdown 30 years ago. Remember: the Kremlin was always and will always be a place for incompetents.

Concerning Ukraine and its future with the EU… I have always said, in a gentle way, so as not to harm Euro Maidan movement: Ukraine’s goal to join the EU was a mistake from the start. I hope Ukrainians are not interested in EU membership as such, but want to participate fully in the European Union with its liberal values. It is ironic that as soon as Ukraine got rid of the USSR yoke, it started asking to join the EU — the equivalent of the USSR. It is incredibly stupid!

If Ukraine wants to be a country with European values, that is fine and right. However, what does that have to do with a socialistic invention like the EU? The EU became a Soviet style structure a long time ago. There was a time when I went to Poland, trying to convince them not to join the EU. They did not listen and joined — now they reap the results. People are unwilling to think; it is simply amazing to me. The ability to think — I am talking about multiplication-table level thinking, not Newton’s theorems — it is simple!

The EU is doomed to fail. Everyone will be better off when it does. Everyone, except Russia

Both Ukraine and the rest of Eastern Europe have very poor understanding of what is really going on in the West. You probably think that others think just like you. In fact, England has long-standing ideas on resisting EU integration. The EU is doomed to fail. Everyone will be better off when it does. Everyone, except Russia. The EU was never a serious threat to the Kremlin; on the contrary: Russian Federation always looked for agreements with the EU bureaucracy. If the EU fails, it will be impossible to reach agreement with all 28 countries separately.

Ukraine should concentrate on its own economy now, instead of crying about the EU crisis. Your economy is not working. Ukraine should start producing something that would sell. You cannot live on credit — it is madness and sheer stupidity! You could attract investment capital; this should suffice for everything you need: reforms, infrastructure, and development. Ukraine just sits and does nothing! It is incredible to me. You should replace your political elite; they are all from the Soviet era, and if they were good at anything at all, that would be corruption and theft. Ukraine’s political elite is useless — you should run them off!

As for Scotland’s possible separation from Britain following Britain’s “Leave” decision — why not, let them go! Nobody would miss them. Scotland is a minus for us; it is a region with highest unemployment and social expenses and the lowest productivity. By the way, Scotland always voted left; all Labor governments benefited from this. If Scotland separates, taking its votes with it, Labor will never win another election. Which is definitely for the best.

32 thoughts on “Bukovsky on Brexit”