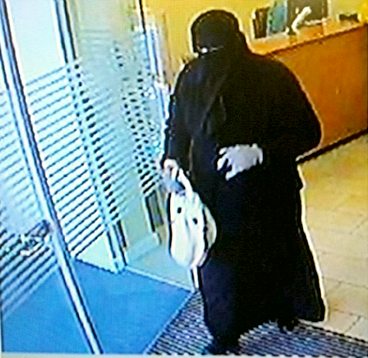 (Photo from CCTV footage of a bank robbery in Leicester, a culturally enriched area of England)

When a culture-enriching woman attempted to enter a German bank wearing a burka, bank employees upheld the rule against face coverings and escorted her off the premises. That didn’t sit well with the woman’s husband, who is taking action against the bank.

Below is the account from Politically Incorrect. The PI post refers to an article in the Grevenbroicher Zeitung. Many thanks to Nash Montana for the translation:

At the entrance door of the Neuss Savings Bank is a clear indication to the ban on wearing face and body coverings on the premises. But since, as we know, our laws and regulations in most cases are diametrically opposed to those in the Koran, which is the only thing Muslims will listen to and follow, our laws and regulations are routinely and gladly ignored. And so, when a 20-year-old orthodox Muslim woman set foot into the Savings Bank, completely ignoring the posted rules at the entrance, the employees at said bank understandably reacted responsibly and the burka-clad woman was unceremoniously thrown out of the bank and escorted off the premises. Her owner husband did not take kindly to this.

The woman, according to statements from the financial institute, had been refused entrance before. But this time she did not want to leave, and instead offered to step into an adjoining room and take off her veil and show her ID. But the employees could simply not warm up to the idea of letting a fully burka-clad woman all the way through the bank and into the back to an available room, and they instead enforced the domiciliary rights of the bank. Stephan Meiser, a spokesman for the Bank, explained: “Not one person has a good feeling about it, when there is an unidentifiable person lurking along hallways or going into a room with that person. It’s the worst-case scenario one could imagine: A criminal person going alone into a room with one of our employees, dropping the veil and pulling a gun.”

The young woman said that an employee pushed her out of the bank. Because she was carrying a heavy shopping bag over her shoulder, she therefore incurred abrasions. The police arrived too late to try and mediate with the participants: The woman had already left. A little while later, however, she filed an assault complaint. The Savings Bank denies the course of events.

The Turkish-born husband of the woman in any case is indignant, and complains that his wife is still completely traumatized and that she now needs to see a psychologist, because she had been touched by a strange man.

The rules of the Koran are as a matter of fact traumatizing and whoever follows them verbatim should go and see a psychologist indeed — best-case scenario in a closed institution.