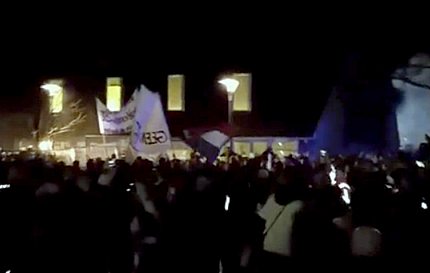 A very unusual event occurred tonight in the small Dutch town of Geldermalsen: there was a riot.

“But Baron,” you say. “That’s not at all unusual. Culture-enrichers riot almost every day in The Netherlands, and all over the rest of Western Europe.”

Yes indeed, they surely do. But this was a riot by the indigenous Dutch, who were protesting the establishment of an asylum center in their town, a deal arranged behind their backs. This is a man-bites-dog story.

In the videos below you’ll at first see the public meeting, which is taking place in a room with big plate glass windows. While public officials drone on, the riot is gathering in intensity just outside those windows.

A Muslima takes the microphone to give her testimony. As she speaks, the people around her grow visibly uneasy, directing more and more of their attention to the windows, outside of which the protesting townsfolk are throwing fireworks and clashing with the police.

After another thirty seconds or so the call goes out to abort the meeting, and everyone hastily leaves the room. After that you can see some footage of what is transpiring outside the windows.

Our Dutch correspondent H. Numan sends this concise explanation of the background for tonight’s events:

The reason for the riots is very simple. Money. Lots of it.

The village is near bankruptcy due to silly investments. Before the real estate bubble burst, they bought agricultural land to change it into an industrial zone. The village spent a lot of money on it (the land itself, infrastructure, etc.) but nobody was seriously interested in setting up their business there. Something they could have foreseen with a bit of marketing research. They didn’t do that research, and Geldermalsen is now looking forward to a €12.5 million write-off. Bankruptcy, in other words.

The mayor found a perfect solution: she offered the industrial zone for conversion into an asylum center. COA (Centraal Orgaan opvang Asielzoekers, the authority responsible for asylum seekers) is desperately looking for asylum locations, so this came as a gift from heaven for them. All Geldermalsen had to do was offer the entire plot for sale, which would have meant a very large asylum center. COA is only looking for locations that can house more than 600 persons. By offering the plot to COA, they could ask the current market price for it. That meant the village would have been saved from bankruptcy.

The mayor is a proverbial progressive dumb [epithet], but not so stupid as to think the population would meekly accept the new arrangement. She understood very well that the population were not going to like her idea. So she tried to do the usual backroom deals so familiar to us all. Arrange everything ‘amongst friends’. Pretend genuine interest in democracy by organizing one (1) public meeting where the (selected) audience would automatically approve the deal. Then COA would buy that land for the market value. And house 1,500 refugees there.

This scheme has now backfired. Last week concerned citizens contacted GeenStijl [major Dutch website] for advice and support. They got that immediately. Good advice, such as ‘select a capable spokesperson’, ‘make sure extreme left as well as right wing extremists from outside don’t interfere’ and how to behave with the media.

They discovered Geldermalsen has a white industrial elephant, and published it. The population was outraged.

Tonight that meeting was held, and got wildly out of control.

The riots are not, repeat, NOT nationwide, only in the municipality of Geldermalsen.

What is striking is the media’s response. They abhor this outburst of violence, and strongly condemn it.

Which is a first. Up until now, they have never ever condemned violence. When committed by left wing activists, that is.

Below are the videos. They’re in Dutch, but there’s really no need for subtitles. The events speak for themselves:

28 thoughts on “Blowback in Geldermalsen”