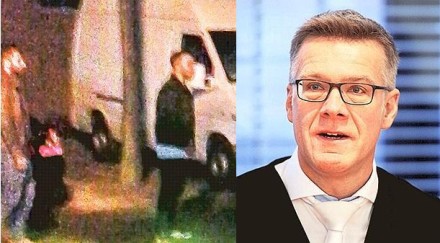 The following report from Germany concerns an incident of culturally enriched ultra-violence in Germany, in which the victim was almost killed, and the perpetrators received either a slap on the wrist or no punishment at all at the hands of German “justice”.

“The Victim Was in the Wrong Place At the Wrong Time”

During the night of September 27-28, 2014, a party took place in the Weser-Ems Hall in Oldenburg, parallel to the Kramermarkt (fairgrounds). In the view of the chair of the assize court in Oldenburg, Sebastian Bührmann, a 25-year-old German visitor to the area, who happened to be in Europa Square, directly in front of the hall, was “in the wrong place at the wrong time.”

Just before 4:40 AM, the leader of a group of four or five “southerners” [1] that had traveled here from Wilhelmshaven, decided: “Now we beat the crap out of a German.?” No sooner said than done.

The group — whose nationality was not revealed by the media — found and surrounded that 25-year-old. The motive and the course of events are established by witnesses. On February 10, 2014, NWZ-online reports:

After the 25-year-old had left the party, he was surround by 4-5 men. They knocked him down and kicked his head severely. They did not stop even when he lost consciousness. He suffered the most severe injuries to his head and face. Police estimate that he would not have survived without the help of third parties. Two witnesses rushed to his aid. These two men too, were beaten by the perpetrators. The attackers only fled when security personnel from the hall rushed to the scene.

On May 5, 2015, NWZ [Nordwest Zeitung] reports at the beginning of the trial:

Among other injuries, the 25-year-old had severely broken facial bones. His injuries were so severe that he had to be put into an induced coma… If the accused had not been interrupted and drawn away from him, he would have died. That was the gist of the charge.

In a July 3, 2015 article in NWZ regarding the publication of the verdict:

A witness had heard the group decide: “Now we’ll beat the crap out of a German”… The defendant knocked the victim down with one blow, rammed his knee into his face and gave him a powerful kick in the head. Witnesses were horrified by the brutality… The victim suffered 19 bone-breaks and was put into an induced coma. He had undergone many operations, and more would follow.

The only description of the victim in the July 3rd article was:

The victim indicated he had some martial arts training, but he did not know that the defendant was a professional boxer.

And with that, we know more about the perpetrator than the victim: A “southern” pro boxer from Wilhelmshaven, on the road with his buddies/brothers/cousins, to “beat the crap out of Germans”.

What about the victim? Can he still pursue his profession? Can he still play sports? Is it possible that his health is permanently damaged? Is he deeply traumatized? Does he have any family? Could he still be in a coma? There is apparently no joint plaintiff in the trial.

We do know something about the efforts to throw light on the incident. Thanks to witnesses, the perpetrators were discovered, but then the work of the investigation has to be repeated for the court:

The court has access to cellphone videos which show this group at a filling station. Analysis of the pictures could help to match different articles of clothing to individual members of the group… Among other things, it is expected that witnesses will be able to determine the alleged criminal acts of the accused from the articles of clothing… At the request of the defense, the shoes the defendant is said to have been wearing at the time are being examined. If he kicked the 25-year-old’s bloody face, there would have to be blood traces on the shoes.

The incident occurred at the end of September and the trial started at the beginning of May. Up until that time, the clothing of the criminal suspects had apparently not even been examined for trace evidence. It seems that just as little effort has gone into a reconstruction of the incident, using the available pictures and witnesses. And this in an investigation connected to an attempted murder!

So the prosecution was unable to prove the participation of each individual member of the group. Only the leader was convicted. And in fact, not in accordance with the charge, which was attempted murder. Instead, it was “grievous bodily harm.”

How can that be?

It certainly did not stop at wanting to “beat the crap out” of someone. The whole episode testifies to an unbridled lust to kill:

Two witnesses rushed to help the injured man. But the perpetrators beat these men too. Only when security personnel from the hall ran up, did the attackers run away.

In the estimation of the police, he would not have survived without the help of third parties.

And motives for murder are recognizable. A random victim and the joy of extinguishing a human life out of pure boredom and swagger fulfill the requirements of “bloodlust.” It is not difficult to identify hatred of Germans among other base motives.

The charge should have read attempted murder. Attempted murder is punished with lifelong imprisonment. But the professional boxer was given five years.

The court evaluated the act as grievous bodily harm. The prosecution had asked for 6½ years — for attempted murder.

The sentence for grievous bodily harm is ten years, given if the victim is injured with weapons, or by a deceptive attack or the attacker is accompanied by other participants! In this case, no latitude for leniency is to be found. There are not even any confessions.

German courts regularly ignore the feet as dangerous weapons. For Judge Bührmann to jail you any longer than this, you would have to literally kick someone to death. Or be carrying a firearm, which Judge Bührmann simply could not ignore.

The criterion for committing a crime together was also avoided, apparently because of insufficient investigation by the prosecutor’s office.

It makes you wonder what it would take to qualify for the full sentence.

Aside from that: Was it taken into consideration that the pack leader is a pro boxer? As a matter of course, martial artists who are accosted by muggers or what-are-you-looking-at? tough guys and break a few of the aggressor’s bones, are issued criminal complaints. For that reason, the 25-year-old warned the southerners of his training, as is taught in any serious martial arts school. Accordingly, the technical fighting capabilities of the southern battle group should have been taken into consideration.

And, as so often in trials dealing with groups leading kicking attacks, it got down to nitpicking.

The defendant denies delivering the decisive kicks to the victim’s head.

It is reminiscent of Jonny K. and Daniel Seifert. [2]

Additionally, because of its serious consequences, the crime could be evaluated as “grievous bodily harm,” thus increasing the sentence. [3]

Instead of regular sentencing for attempted murder (25 years), attempted manslaughter (15 years), premeditated, cooperatively inflicted dangerous and grievous bodily harm (10 years +), we have a Mickey Mouse decision with no visible mitigating circumstances. The other perpetrators walk free, apparently without even community service. What a great judge! And the prosecution is no better…

Because of ignorance or obviously sloppy investigative work, the prosecution had difficulty in making a watertight case against the gang of “southerners” for cooperative commission of the crime, and the accomplices all walked. The judge is “excluding nothing” but is punishing only one person.

The court did not exclude the possibility that others had also kicked the unconscious man’s head.

So what is being said to justify this hair-raising decision? The talk is about just one perpetrator, and he really couldn’t help it.

“The perpetrator was overwrought and highly intoxicated,” said lead justice, Sebastian Bührmann to NWZ on Thursday. “We are assuming a momentary breakdown.”

The act occurred “in the moment” said Bührmann. “Too short a time to form the decision to kill.”

In the court’s opinion, the defendant wanted to prove himself. With friends who also had “southern roots,” he had traveled from Wilhelmshaven to the Kramermarkt.

The lead judge, Sebastian Bührmann, was probably also at the wrong pace at the wrong time, as it is easy to see from this rationale. Was the judge perhaps overwrought and intoxicated? Is this a case of momentary breakdown, too brief to conclude a breach of the law? Did the judge wish to prove something to his friends? Did he, on this day of all days, cancel out his own grandiloquent claim, [4] “My courtroom is not known for lenient decisions”?

The verdict is not yet legally final.