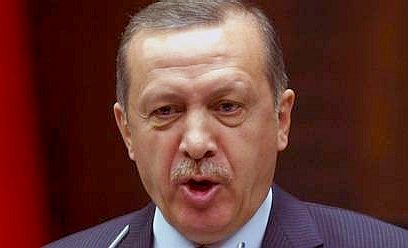 It has been clear for more than a decade that the former prime minister and current president of Turkey, Recep Tayyip Erdogan, has aspirations to revive the Ottoman Empire with himself as Sultan. His duties as Sultan would include functioning as the Caliph of all Muslims (or at least the Sunni branch of Islam).

The meteoric rise of the Islamic State, which is headed by a rival claimant to the office of Caliph, has given new urgency to Mr. Erdogan’s mission, and induced him to accelerate his grandiose attempts to consolidate power and establish his uncontested supremacy as the leader of Sunni Islam. He has increased his persecution of political rivals and opposition journalists in the last couple of years, and his meddling in the affairs of other countries, especially Syria, is becoming more and more brazen.

Among other responsibilities, the Ottoman Sultan/Caliph would hold suzerainty over al-Quds, or Jerusalem, which historically was part of the province of Syria in the Ottoman Empire. In the following video clip from last month, Mr. Erdogan expresses his longing for Jerusalem and his determination to regain control of it.

Remember: this man is the leader of Turkey, our “staunch NATO ally”.

Many thanks to Tanya for the translation, and to Vlad Tepes for the subtitling:

11 thoughts on “The Man Who Would Be Caliph”