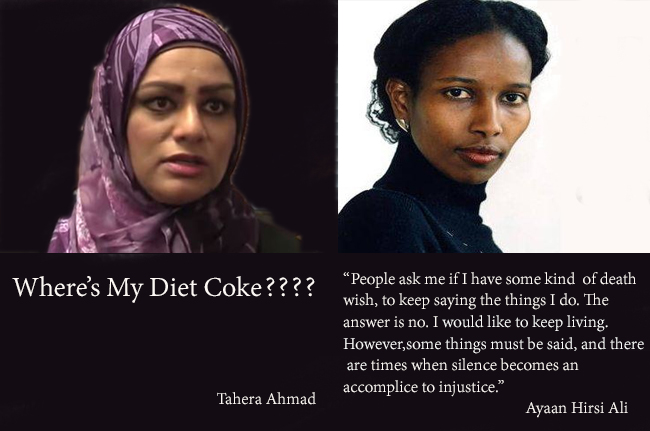 By now you’ve all heard about a young Muslim woman named Tahera Ahmad, who started a guanostorm on Twitter this morning about her brutal treatment at the hands of United Airlines. It seems that a stewardess discriminated against her by refusing to let her have an unopened can of Diet Coke.

At this point, it looks like we’re in for Flying Imams Lite — there’s a boycott campaign against United being ginned up online by Muslims and their leftist allies. The airline is already groveling and salaaming and issuing profuse apologies to the world’s 7.8 octillion Muslims.

For the moment, let’s put aside the fact that (as Daniel Greenfield points out) Ms. Ahmad, in her capacity as a Muslim chaplain at Northwestern University, joined the protest in social media against honoring Ayaan Hirsi Ali at Brandeis. We’ll let The Guardian have first say:

‘No Diet Coke for You’: Islamophobia at 30,000 Feet Leads to Viral United Airlines Boycott

Muslim chaplain Tahera Ahmad’s Facebook post alleges discrimination, saying man next to her was served beer as airline says it will ‘get a better understanding’

What happens when you ask for an unopened can of Diet Coke on an airplane? If you’re a Muslim woman, according to one report, you don’t get served.

And the man sitting next to you gets an unopened can of beer just fine.

Tahera Ahmad, a Muslim chaplain at Chicago’s Northwestern University, documented these allegations from onboard a United Airlines flight this weekend in an episode that almost immediately went viral – and led to pledges to boycott the airline.

On her Facebook page, Ahmad claimed a flight attendant was “clearly discriminating against me” after she asked for an unopened of soda for hygienic reasons and says was told, “Well, I’m sorry. I just can’t give you an unopened can, so no Diet Coke for you.”

When the man next to her allegedly got an unopened beer can from the in-flight service, Ahmad said she was told something even more inflammatory: “We are unauthorized to give unopened cans to people, because they may use it as a WEAPON on the plane.”

Ahmad said her fellow passengers were of no help: “you Moslem, you need to shut the F up,” Ahmad said, in the Facebook post, that she was told by another male passenger across the aisle. “[y]es you know you would use it as a WEAPON, so shut the F up.”

There’s something fishy about this story. First of all, there’s only one account of the incident, and that’s Ms. Ahmad’s. And it’s everywhere. All the media stories are based on it.

Now, strictly speaking, it wouldn’t be discrimination to deny a Muslima an unopened can whilst allowing, say, a Hasidic rabbi to take one. It would be simple prudence, a sound counter-terrorist policy.

But airlines can’t do that, for the same reason the TSA pats down nuns and sends Granny through the naked scanner: to prove that no one is being discriminated against. That’s far, far more important than any prudent counter-terrorism policy.

So I simply don’t believe United has such a policy.

That’s one thing. Now take a look at a second account of what happened, also based on Tahera Ahmad’s social media posts but with slightly different details, from the The New York Daily News [emphasis added]:

United Airlines has been accused of discrimination after refusing to give an unopened can of Diet Coke to a female Muslim passenger.

Tahera Ahmad said in a post on her Facebook page that the flight attendant was “clearly discriminating against me” after giving the male passenger seated next to her an unopened can of beer.

She did not respond to the Daily News’ request for comment.

Ahmad, who is the Muslim chaplain at Northwestern University, said that in the ensuing argument, one of her fellow passengers told her: “You (are) Moslem, you need to shut the f–k up.”

The alleged incident happened as she asked for the can of pop on a flight from Chicago to Washington on Friday. Ahmad was traveling to attend an interfaith event for KIDS4PEACE to promote peaceful conversations between Israelis and Palestinians.

Ahmad was given one can that had already been opened, but said she wanted an unopened can for hygienic reasons.

But she said she was told by the flight attendant: “Well, I’m sorry. I just can’t give you an unopened can, so no Diet Coke for you.”

Ahmad said she then pointed out that the man next to her had just been handed an unopened beer and told the attendant she was being discriminated against. The employee then quickly opened her neighbor’s beer can.

The flight attendant then told the passenger: “We are unauthorized to give unopened cans to people, because they may use it as a weapon on the plane.”

Asking other passengers for help, she was then told to “shut the f–k up,” Ahmad claimed.

“I can’t help but cry on this plane because I thought people would defend me and say something,” she wrote in the post. “Some people just shook their heads in dismay. “#IslamophobiaISREAL”

But people on the Internet have supported her and the post had received nearly 7,000 shares as of Sunday morning. Some Twitter users pledged to boycott the airline and are sharing a picture of a can of Diet Coke with the hashtag #unitedfortahera.

United said in a statement issued Saturday night that the flight attendant on Shuttle America flight 3504 attempted “several times” to accommodate Ahmad’s request and there was an initial misunderstanding.

They also said the flight’s crew talked to her when they arrived and the company further reached out Saturday afternoon to apologize to her.

“We look forward to having the opportunity to welcome Ms. Ahmad back,” United said.

A United spokesman declined additional comment to the Daily News.

But Ahmad said in another post early Sunday morning that she was “truly disappointed” by the company’s response, which she said labeled the incident as a can of soda-specific issue and did not addressed [sic] the bias she said she encountered.

This is the important paragraph:

Ahmad said she then pointed out that the man next to her had just been handed an unopened beer and told the attendant she was being discriminated against. The employee then quickly opened her neighbor’s beer can.

I’ll go out on a limb here: I’ll bet that opening the can after the passenger takes it is standard operating procedure for the stewardesses, and probably also airline policy. You hand it to the passenger and then pop it for her once she has it firmly in hand, so that it doesn’t spill in her lap if there’s sudden turbulence.

Most likely the stewardess handed out two cans, one to the Muslima and one to the man next to her. Then she reached over and opened the Coke for Ms. Ahmad, who said, “No, I don’t want it opened.” Maybe she wanted to wipe the top with Zam-Zam water to make sure it was free of najis before she opened it. But when the stewardess refused, that’s when the trouble started.

And maybe the stewardess paused long enough before opening the man’s beer (Eww! All that horrible haram liquid! Right next to me!) for Ms. Ahmad to notice a wonderful lawfare opportunity. In any case, she immediately grabbed the Flying Imams’ playbook and started the pre-litigation process on Facebook and Twitter. And here we are.

It seems highly unlikely that United Airlines treats Muslims any differently from anyone else. Neither the suits in the head office nor the stewardesses in the plane could be that stupid. But that won’t do them any good now — they’ll probably have the tar litigated out of them for months or years to come, and have to donate who knows how many millions to “interfaith outreach programs” or “Islamic cultural centers” in the time-honored tradition of the shakedown, à la Al Sharpton.

And who knows? Maybe Muslims will get a special dispensation from now on, and be allowed to have unopened Cokes on airplanes while the rest of us have to have ours popped for us.

It would be typical of the way our oh-so-PC society avoids “discriminating” against Muslims, which is to treat them differently from everyone else, and give them privileges that no one else has.

31 thoughts on “The Pause That Refreshes”