The following translated article from Frieord.no was originally published at Vlad Tepes. Many thanks to Liberty DK for the translation:

Shocking figures: 84 percent of people charged for serious crimes in Copenhagen are immigrants 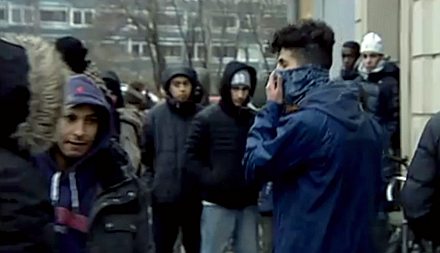 Despite the debate, figures and statistics are open and accessible in Denmark, even though the Danish government tries to hide the chilling cold facts from the population.

Today the Danish newspaper Expressen revealed amongst other things that 84 per cent of those taken into custody in Copenhagen are immigrants.

New figures show that only 1 out 10 people who go to court in Copenhagen are ethnically Danish. 9 out of 10 are immigrants and the cost to society runs into the billions.

According to Danish Minister of Justice Metter Fredriksen, crime statistics are getting lower in our society and people are apparently able to be safer on the streets. But this is a truth with exceptions.

“If the risk of crime has actually fallen, it is due only due to the fact that the number of burglaries has fallen”.

But reality tells us something else — the number of cases of sexual abuse, violence and drug crimes is on the rise across the country. And those behind the violent crimes are often immigrants.

According to the new figures this shows that more than 8 out of 10 who are put in detention are immigrants, out of which 10 percent have Danish citizenship.

To be kept in detention one must have committed a crime that carries a sentence of at least 18 months; in other words, those who are in custody are charged with serious crimes.

Perhaps even more remarkable is the fact that as many as 25 per cent of asylum seekers residing in Denmark have been arrested for a crime. Ekstra Bladet also points out that the number of asylum seekers has quadrupled under the Labour government led by Helle Thorning-Schmidt.

In 2014, it also emerged that crime among immigrant youths has risen sharply. In 2007, 1028 of young immigrants were charged with a crime. In 2012 this figure had risen to 1661. This is partly due to the fact that the number of immigrants entering Denmark has increased. Compared with their ethnic Danish peers the immigrant youth commit twice as many crimes.

Violent crime has risen simply because more criminal immigrants come to the country. Ekstra Bladet concludes that the government lies to and manipulates their constituents and the Danish people when they claim that the country has become safer.