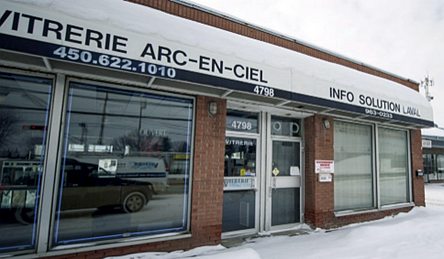 Last Thursday we posted an article about the Quebec government’s decision to shut down a mosque in Terrebonne that had been operating without a permit on an industrial estate.

Now comes a story about a similarly camouflaged mosque in the adjacent city of Laval, a western suburb of Montreal. In this case, the mosque in question was functioning on the premises of a defunct commercial business without any identifying signs, in violation of the city’s zoning ordinances.

The following article about the Al-Iman cultural center has been translated by Carolus. The translator includes this note:

So far, I can’t see any evidence that Quebec bureaucrats recognize the threat of Islam and of any mosque anywhere in the land. There are approximately 100 mosques in the city of Montreal, and they are under no pressure from the bureaucracy to shut down or move.

A mosque travels under the radar for two years

A mosque installed in a commercial building for the past two years is under investigation by the City, because houses of worship are forbidden in this area.

“Our agent went inside, but there was no one. We must therefore return there to acquire the proof that it is indeed a house of worship.” – Valérie Sauvé, City of Laval spokesperson

The mosque known under the name “Al-Iman cultural center” houses an association founded in 2008, offering educational and social services to the community. The association’s web site states that the main premises are indeed at 4800 Laurentides Boulevard in Laval. However, the center stayed under the radar for the past two years.

According to an employee from a neighboring business, there many members come there, especially for the Friday noon prayer. Dozens of cars are parked near the other businesses, because the entrance door is behind the complex. “This sometimes causes a problem, because cars block our delivery alley,” says the employee.

From outside, nothing indicates that a mosque is housed in the premises. The tenants have installed opaque curtains in the windows, so it is impossible to see inside.

On the front of the building, the sign from the previous business has been left up, and a notice written in Arabic has been posted on the front door.

The city gets involved

The landlord who rents the place to the Al-Iman Center was furious after an agent from the City of Laval came to the premises yesterday morning.

“The city came and will evict them”, sniped at us the landlord Richard Giguère.

It was only after Le Journal notified the City of Laval of the existence of the mosque that they decided to investigate. The city’s agent must now determine whether the place is a house of worship or not.

If that is the case, the mosque will have to move, since the zoning regulation forbids houses of worship in this area.

If it is proved that the place houses a mosque, the Al-Iman Center will receive a notice of non-compliance and will have to cease all activities not permitted by the zoning regulations.

The organization will have ten days to contact the city.

If the tenants do not comply, a notice of infringement will be sent to them, as well as a formal complaint.

“These are the normal procedures for zoning infractions. In Laval, we have zones reserved specifically for houses of worship,” confirms Valérie Sauvé, a spokesperson for the City of Laval.

It was impossible to reach a spokesperson for the Al-Iman Center, despite the multiple attempts made by the Journal.

6 thoughts on “Another Veiled Mosque in Quebec”