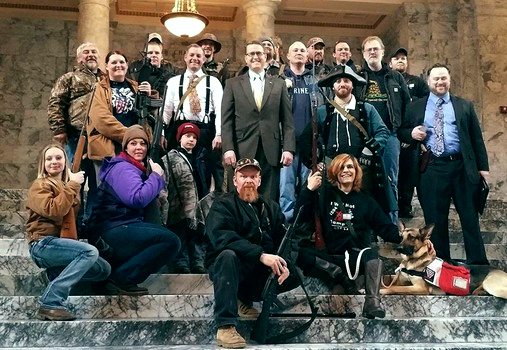 Tomorrow may turn out to be a big day in Olympia, the capital of Washington State. Supporters of the Second Amendment from across the state and beyond are gathering at the state capitol to protest the state’s latest restrictive anti-gun measure. Their method of protest will be to openly carry their firearms in the gallery of the state legislature.

Some background: A Washington State ballot initiative further restricting citizens’ gun rights was passed last November. Among other forms of protest, gun owners in Washington expressed their displeasure with the government by openly carrying their firearms in the viewing gallery of the legislature. State legislators were alarmed, and afraid for their safety.

Hmmm… Why would politicians fear peaceful but armed American citizens?

In response, the leadership of the Senate and House reinterpreted existing rules by defining guns as “props” being used for demonstrations, analogous to signs and banners. Openly carried firearms have now been prohibited under the new interpretation. Violators of the rule who refuse to leave when ordered have been told they will be arrested.

At 10am tomorrow determined patriots will be there with their “props” in defiance of the new rule. What will happen after that is anybody’s guess.

I don’t know if anyone will be live-blogging the event. Mike Vanderboegh can’t do it, because he is one of the speakers, and may end up getting himself arrested. However, Western Rifle Shooters Association will probably be covering it.

David Codrea has written an inspiring essay about tomorrow’s protest, excerpts from which are reproduced below. For readers unfamiliar with the history of the American Revolution, Mr. Codrea’s use of the phrase “intolerable acts” is a specific historical reference to repressive legislation that was passed by the British Parliament in 1774 in response to the Boston Tea Party:

“Gun Owners Prepare for Arrest at WA State Capitol,” Kit Lange of The Patrick Henry Society reported Monday. “Liberty activists and gun owners organized by Liberty for All and The Patriots Stand are converging at the WA State Capitol in Olympia on Saturday at a rally meant to protest and violate new rules imposed by the legislature banning open carry in public viewing galleries.”

Lange was referring to the Our Capitol Our Rights response to politicians closing off open carry of firearms in the legislature. Armed activists will be going there this weekend to test the new rule by disobeying it.

Among those going is my friend and colleague, citizen journalist, blogger, public speaker, activist and founder of the “Three Percent” movement, Mike Vanderboegh. There has been no shortage of criticism for the actions and intentions of the open carriers, and by that I mean from the “pro-gun” side. I have had doubts of my own about the wisdom of Mike participating in the event, which I expressed to him in a private email, and consented to allowing him to post it for others to read and comment on.

Many of those doubts have since been partially allayed by seeing some concerns addressed, particularly that legal counsel has been identified and potential consequences understood, that funding is being established to help with legal costs, and that communications are being set up to provide real time information to offsite monitors and interested parties as events unfold.

The thing is, what I think, or what you think is a moot point as far as Saturday’s planned actions are concerned. Regardless of sentiments, fears, cautions and warnings, it’s “Game on,” and the activists will not be deterred. This is the new paradigm all of us, but especially the “gun groups,” need to get used to, because it effectively nullifies any “compromises” some may be inclined to agree to. Ultimately, people are going to choose to obey or disobey edicts they know to be wrong, and to decide if they wish to confront those denying them their rights and property. Once the decision is made, our approval and agreement over tactics don’t matter. Nothing we say or do is going to stop it. Once the decision is made, we can condemn them as extremists who make us all look bad, as some are doing, or we can remind ourselves that the real extremists are those who disregard oaths, deny rights and force their will on others with life-destroying consequences.

Besides, to doctrinaire monopoly of violence cultists, “extremist” is a term used by “progressive” apparatchiks as a weapon against good Americans who believe in the right to keep and bear arms. “Moderates” in the pro-gun camp inclined to repeat that charge against determined open carriers need to be reminded that it will be leveled against them soon enough the next time they promote or oppose a bill.

We would also do well to remind ourselves that civil disobedience is a time-honored tradition in this country, which itself was founded first in petitioning, then in disregard, defiance, resistance and rebellion. Henry David Thoreau wrote the seminal work on the matter, and we’ve seen it used with varying degrees of success throughout our history, notably in the demand for civil rights for all.

There’s a growing movement that’s getting sick and damned tired of all the posturing and games, while rights we clearly understand are ours are being denied by self-serving oathbreakers as citizens are intimidated and punished for exercising them. Some people are through asking. They’re going to start taking back, especially where listening to the lawyers and the lobbyists has failed.

Look at the untold hundreds of thousands of gun owners, who simply wish to be left alone but who are adamant in demanding their rights, and who have thus refused to register their guns as ordered in places like California, New York and Connecticut.

Look at how “authorities” know their demands have been ignored for all to see, and wish some of their impulse control-challenged media sycophants would stop calling attention to their impotence, and instead catch on to a self-imposed code of silence on mass “scofflaw” roundups that the major anti-gun groups seem to have adopted. Look at how government agents backed down from armed citizens at the Bundy Ranch. Look at how Oath Keepers maintained their armed rooftop vigils, despite unlawful police orders to stand down.

Look at the resolve of Washington’s “I Will Not Comply” activists.

“We are asking for people to come and stand with us, whether that be armed openly, concealed, or even unarmed,” rally leader Kit Lange explained. “Those who enter the gallery while open carrying will be arrested for criminal trespass (a misdemeanor); however, concealed carry is still ‘allowed’ (although the state patrol has said they will be checking permits). Those who wish to stand do NOT have to be arrested; they are welcome to come concealed and take pics/video, or simply serve as witnesses to what’s happening.

“We do ask that those who come understand that responsible, respectful conduct is necessary,” Lange continued. “Obviously safe firearm handling (muzzles up at all times) is necessary; we are also asking that those who choose to be arrested do not physically resist. We will act with principle and calm. We are standing for our liberty and will adhere to the catechism of the Three Percent: we do not shoot first and we do not target innocents. We are simply there to force the issue of infringement. Those who choose to act irresponsibly or attempt to incite violence will be on their own.”

This is a new paradigm for gun rights activism those of us used to doing things the old way are going to need to get used to. A critical mass of Americans is fed up suffering under intolerable acts imposed on them by corrupt bureaucracies, administrations, courts and enforcers, and they’re putting all of us on notice they will not comply, they will not obey and they will not disarm. [emphasis added]

Expect to see more of this, regardless of what we see on Saturday, or perhaps because of the confidence or outrage the events of the day will bring. Expect to see it in places where the old ways have failed, and people who understand a right delayed is a right denied find that unacceptable, and cause for immediate defiance.

Some will no doubt come back with the observation that this will only antagonize “authority,” and the response will be more restrictions, like we’ve recently seen happen in Olympia. That may be true, but it can also backfire, as those intent on reclaiming what is theirs are determined to simply not obey, regardless of what retaliatory measures are passed and signed into… well, it’s not really “law” if it infringes, is it?

As gun owners who advocate for the right to keep and bear arms, we are each of us faced with a choice, and one we can no longer put off. We can join our voices to those condemning these demonstrators as radical extremists, that is, the same people who would call us that, or we can support the peaceable armed protesters, even if their actions make us uncomfortable, and even, especially, if this new reality scares us.

It wasn’t gun owners who pushed things to this point. Some — a few for now, but one that appears to be growing — aren’t about to be pushed back or over, or kept from advancing to where they know they have a right to be.

There is a relevant passage on the same topic from the novel Cryptonomicon by Neal Stephenson:

It is an oddity of the law in many jurisdictions that, while carrying (say) a concealed one shot .22 derringer requires a license, openly carrying (e.g.) a big game rifle is perfectly legal. Concealed weapons are outlawed or at least heavily regulated, and unconcealed ones are not. So a lot of Secret Admirers who tend to be gun nuts have taken to going around conspicuously armed as a way of pointing out the absurdity of those rules. Their point is this: who gives a s*** about concealed weapons anyway, since they are only useful for defending oneself against assaults by petty criminals, which almost never happens? The real reason the Constitution provides for the right to bear arms is defending oneself against oppressive governments, and when it comes to that, your handgun is close to useless. So (according to these guys) if you are going to assert your right to keep and bear arms you should do it openly, by packing something really big.

I advise everyone to pay attention to the news from Olympia tomorrow.

17 thoughts on “Showdown in Olympia”