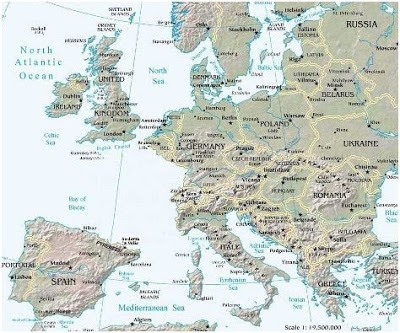 Marine Le Pen, the leader of the Front National in France, is seeking an amicable divorce from the European Union. Well, a relatively amicable one, anyway. A French exit from the EU was previously unthinkable, but now, in the wake of last month’s local and EP elections, the new electoral clout of the FN has made the possibility quite thinkable.

JLH has translated an article about Marine Le Pen from an Austrian daily newspaper. He includes this brief note:

This piece on Marine Le Pen has some interesting reverberations for what “the other half” thinks in Europe, while the big Bries get on with trying to build their lofty edifice.

The translated article from Kurier:

Le Pen Warns Merkel of An “Explosion of the EU”

The 25% approval in the EU elections last Sunday has given the head of the French Front National a new self-confidence. In an interview with the German newsmagazine Spiegel, Marine Le Pen — who intends to found a rightist faction with Austria’s FPÖ in the European Parliament — is focused above all on Germany.

“If she does not see the misery suffered by the other peoples of Europe, Germany will make itself hated,” she says of Angela Merkel, who is the main target for anti-European parties. The German Chancellor should think about her cutback plan, she says. Merkel is defending a policy that is advantageous only for Germany, but harmful to others. “She believes it is possible to conduct policy against the population.” Le Pen’s prognosis is that this would “lead to the explosion of the EU.”

Merkel is not the only one Le Pen calls to account. “I blame our own leaders, who are not representing our interests. A strong euro is ruining our country.”

On the other hand, Le Pen has respect for the actions of Vladimir Putin, as she has already said in an interview with the Kurier (see below). “I have a certain admiration for Vladimir Putin, because he does not allow any country willy-nilly to impose decisions on him,” she says in reference to the Ukraine question. The Russian president thinks first of Russia’s interests, and that is simpatico. “To that extent, I have the same respect for Putin as for Mrs. Merkel.”

(KURIER interview with Marine Le Pen, who hopes to lead France out of the EU, and praises Russia’s president)

Front National chair, Marine Le Pen (following an election rally in Evreux in Normandy) described for Kurier her plan for France’s exit from the EU. She intends to have “intelligent protectionism” on the borders. She accuses the EU of a “cold war” against Russia. Putin is an exemplary patriot and European. On the other hand, France was guilty of electoral fraud in the presidential election of 2002, when her father, Jean-Marie Le Pen, was defeated by Jacques Chirac.

Kurier: Madame Le Pen, you told me in an interview in June, 2012, that you hoped for the “collapse of the EU” and called yourself then a “convinced EU-phobe.” Is that still your position?

Marine Le Pen: Yes. yes, that is my position. I believe in a Europe of free and sovereign nations. That is the only Europe that has functioned, for instance with the Airbus consortium or the Ariane rocket program. A Europe of peoples free to decide about their participation in projects that are in their interests. It is impossible to transform the present EU into a democratic Europe.

Kurier: What European institutions would you dissolve?

Le Pen: I cannot do any such thing. I can only block the EU. I can prevent the adoption of directives which are against the interests of the French people. Block an additional expansion, like Macedonia, Albania and naturally Turkey. I can block new politically inspired financial cut diktats.

Kurier: But assuming you are elected, what European institutions would you dissolve? The EU parliament?

Le Pen: If I were to become head of state, I would undertake nothing in regard to the EU parliament. If I were to be elected president of France, I would organize a referendum. In the time preceding the referendum, I would ask the EU to grant us the return of these four basic sovereign rights: economic, monetary, legislative and territorial. Should the EU not return these rights, I would urge the French to exit the EU by referendum.

Kurier: And also in regard to EU institutions, because for this election to the EU parliament you are allied with the FPÖ. Is that still your preferred partner?

Le Pen: I have no favored partner. We have long-standing confidential and working connections with the FPÖ.

Kurier: So, you are blocking certain decisions in the EU, but also, since you are for a collapse of the EU, which institutions would you dissolve if you could?

Le Pen: My dear sir, we cannot do that. I do not belong to the political class that just talks about things for the sake of talking. We do not have that ability in the EU parliament. We will only have it if we win the [French] presidential election. That could be taken into account. Then we could change everything.

Kurier: So in the EU parliament, what would you…

Kurier: Why did you refuse a debate with Martin Schulz, chief representative of the European Social Democrats?

Le Pen: Monsieur Schulz should debate Madame Merkel. I have no idea what he has to do with France.

Kurier: Aside from the EU, what would be your first political move as president of France?

Le Pen: There are a number. Immediate action must be taken about immigration policy. It is urgent that we enable economic patriotism and intelligent protection of the borders.

Kurier: You have relations with the head of the Russian state. Its representatives have wished your party good luck. You have expressed your sympathy for Putin.

Le Pen: I would like to lead a state independent of blocs — subject to neither the USA nor Russia. To speak with these two powers as an equal. Without pursuing a cold war like the EU is conducting against Russia in an absolutely stupid manner and in utter contradiction to the interests of the European peoples. Maintaining good relations with a power like Russia is a minimum in consideration of peace, because people in the EU talk about peace but wage war. A war of words, of diplomacy, of economics. I would like peace.

Kurier: How do you explain the sympathy which Putin’s camp expresses for your “Front National”?

Le Pen: Because Monsieur Putin is a patriot. He values the sovereignty of his people. He knows that we have common values. Those are the values of European civilization. Apparently he does not see these qualities of courage, sincerity and respect for identity and civilization in other political movements in France.

Kurier: So do you find that Putin represents those values?

Le Pen: Yes, I believe that. At any rate, (slight hesitation) everything points to that. The way he leads his country — that is a man for whom these values are important. Assuming that one recognizes these values. The socialist party does not recognize these values.

Le Pen: Please, don’t tell me about election fraud. After what we experienced in 2002, we need no lectures. No one is more successful at election fraud than France was in the run-off election for president in 2002.

At this point there is applause and cries of Bravo from the LE Pen supporters who had surrounded the politician and the KURIER correspondent.

(In the French presidential elections of 2002, Jean-Marie Le Pen — former head of the FN and father of Marine — came in second with 16.28% of the vote. In the succeeding run-off, Le Pen was beaten by Jacques Chirac with 82.21%.)

10 thoughts on “A Europe Without France”