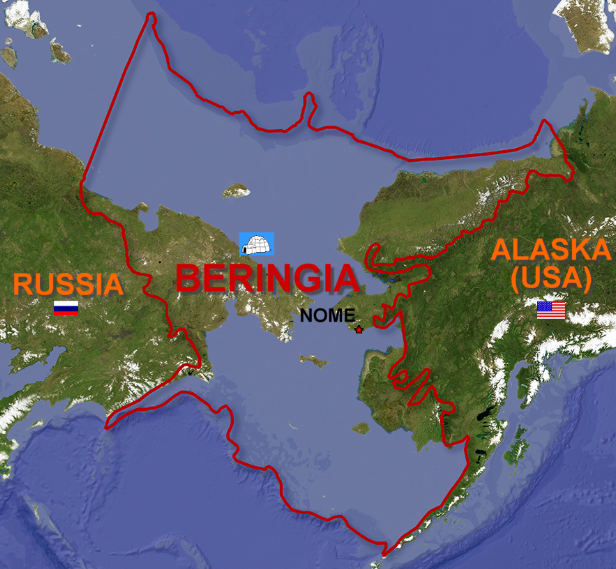 Two weeks ago, after months of Russian military buildup in eastern Siberia, 95% of the ethnic Russian residents of northwestern Alaska voted to declare independence from the United States and join their brethren just across the Bering Strait. The only remaining question is whether they will choose to join the Russian Federation, or set up a sovereign independent state known as the Republic of Beringia.

Below is the latest report from The Los Angeles Times on events in Beringia since the referendum:

What next for Beringia?

The chill wind blows in off the Norton Sound in the harbor area of Nome, the capital of the newly-independent state of Beringia. Longer days have returned to Nome, but there is not yet any sign of spring.

Earlier today I talked to a number of citizens down by the wharf, all of them Beringitsi, the ethnic Russians who have maintained their language and cultural identity here for centuries, since Catherine the Great first wrested Alaska from the Inuit in the 1780s. The fact that Secretary of State William Seward bought their territory from Russia in 1867 is of no moment to them. As far as they are concerned, Beringia remains Beringia.

Most of the men I spoke to were unwilling to give their names or go on the record. However, Pyotr Kornilov, a seal-blubber dealer and boat salesman, was ebullient and talkative. He spoke to me in fluent English, albeit with the peculiar Beringit accent.

“Aye, everyone around here is real happy about the vote,” he told me. “We’ve got our own flag and our own government offices now. Beringia is a reality!” He grinned at me, showing three missing teeth on one side. “We’ve always been Russian, ever since we first kicked the Inuit into the sound!”

I asked him if he thought the new state would join up with Russia.

He gave me a sidelong, canny look. “It’s too early to say, lad. I’ll tell you this, though: we’ll do whatever is in our best interests. That might be Russia, or it might not.”

I asked him about the Beringian economy. He reminded me that large oil reserves were recently discovered under the Chukchi Sea, just off Cape Lisburne.

“We’ve lots of choices about who will develop it, y’know. It’s not just Rosneft. The Chinese are very interested. We had a delegation of Chinese geologists and energy officials up here just last week. We’ll see who offers the best deal.

“I’m partial to the Chinks meself.” He winked at me. “Better-looking women, y’know…”

What caused the Beringian people to vote so overwhelmingly for independence?

His eyes blazed. “Obamacare was the straw what broke the walrus’ back,” he said fiercely. “We reckoned we’d had enough of all that socialism! That’s what made people go for Russia.”

I scanned the waterfront where the crowds milled in the harbor area. Customers were looking over the fish and smiled as they gazed out at the sound. There was no hint of trouble here. According to the grapevine, however, the same could not be said of other towns and villages. In Shaktoolik and St. Michael there were reports of demonstrations and violence by members of the local Muslim minority group. Known as the Dimuit, the Muslims say they lived on this coast long before the Russians arrived, ever since the time of the prophet, when they conquered Alaska for Islam. They are now calling on the United States to their protect their rights as an indigenous ethnicity.

But Mr. Kornilov dismissed them with a wave of his hand. “The Dims? They ain’t nothin’! There’s only fourteen hundred of ’em in the whole blamed country.”

I reminded him of the mega-mosque that is currently under construction at Point Hope. When complete, it is expected to have 90,000 square feet of worship space and a hundred-foot minaret.

He sneered. “Aah, that’s just Saudi money! You can build anything you want if you have enough Saudi money.”

21 thoughts on “An Independent Beringia?”