This guest-essay by a Coptic Christian named Ashraf Ramelah reports on the recent constitutional referendum in Egypt and the misplaced support by the American government and chattering classes for deposed President Morsi and the Muslim Brotherhood. 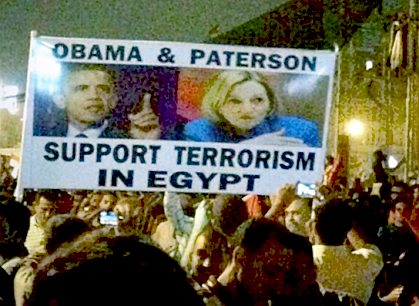 Egyptians, passionate and elated, leap for joy in the aftermath of a major victory sealing the death of Morsi’s autocratic regime and his Muslim Brotherhood backers as Egypt’s new draft constitution is approved by a huge margin. A woman exiting a poll opens her heart and cries out to the object of her affection, “General Al-Sisi, I love you and I will marry you.” She is 75 years old. Islamist poll judges were removed early on for directing voters to vote “no.” A 91-year-old Copt receives a cup of tea at his Cairo neighborhood poll after casting his vote where he was blocked from voting in two previous 2012 elections — the constitutional referendum and the presidential. Call it “bogus” as The Washington Post has or call it “justice” as Egyptians demonstrate.

On January 13, one day before the inevitable “yes” vote approving Egypt’s new draft constitution, The Washington Post editorial board (Fred Hiatt, Jackson Diehl, Jo-Ann Armao, Jonathan Capehart, Lee Hosckstader, Charles Lane, Stephen Stromberg, Tom Toles, Autumn Brewington, and Michael Larabee) published an article entitled “Egypt’s bogus democracy doesn’t deserve U.S. aid,” arguing on behalf of a “no” vote. The Post article glosses over the real meaning of critical facts, transforming Egypt’s military into a Nazi revival rounding up innocent bystanders. It advocates for rejection of the new draft constitution even as Egypt’s violent streets show us that Muslim Brotherhood thugs would be fueled by a “no” vote — empowered by the defeat of what they consider to be an anti-Morsi constitutional draft.

The article indicts Egypt’s military and General Abdel Fatah Al-Sisi essentially on the basis of Egypt’s crackdown on the Muslim Brotherhood (now blacklisted as terrorists) and the former autocrat Mohammed Morsi. It sanitizes Muslim Brotherhood rhetoric and violence with such terms as “peaceful”, “activists,” and “an elected Islamist government.” Calling Egypt’s military a “regime” and tying it to a nonexistent coup d’état, the article views Al-Sisi as Egypt’s enemy spun out of control and an imminent threat to the welfare of Egyptians. This is nonsense and an insult to Egyptians who have suffered much to arrive at clarity (the Muslim Brotherhood is bogus and dangerous) and a solution for this crisis.

Ninety-eight percent of 21 million voting Egyptians approved Egypt’s new draft constitution, which represents a vote of confidence for the work of the military, police and interim government. Egyptians endorsed it with double the voter turnout this time for the Monsour interim government’s constitution referendum than before in 2012 for Morsi’s constitutional draft with 11 million voters. Egyptians want this crackdown by authorities, which does not impede law-abiding freedom fighters but Muslim Brotherhood members, sympathizers and gangs opposed to them — supporters of ousted President Morsi tearing down the country with violence and bloodshed, threatening civil war.

Interim and temporary President Monsour aligns with Egypt’s liberal freedom coalition to a greater degree than any previous Egyptian leader since the January 2011 uprising began. Right now this seems to be Egypt’s salvation in light of the country’s serious brush with Islamist rule and a vindictive Muslim Brotherhood. The notion of Egypt’s military as an autocracy “more repressive than any the country has known in decades” installed by this “yes” vote is wrong and deceptive. Instead, Egypt’s military hunts down the regime considered by Egyptians to be the most repressive of any regime in Egypt’s modern history, the Muslim Brotherhood party members and supporters. General Al-Sisi won the hearts and minds of Egyptian pro-democracy fighters for accomplishing the job of getting rid of Morsi, but he never hijacked their cause or took the helm of Egypt against the people’s will (unlike SCAF in 2011). He led by following protocol from pre-Morsi constitutions. An independent interim government was formed from appointments made by Adly Monsour of the High Court as called for in the case of a presidential vacancy. General Al-Sisi was then reinstated as Defense Minister.

The Post article anticipates that General Al-Sisi will lead Egypt into a “more malignant form” of a Mubarak-like regime and attacks his “road map” as pre-2011. But the General promotes a “road map” issued by him on the same day as Morsi’s arrest that specifically guards against this, spelling out eight fundamental items* in order to preclude such an outcome.

After trouncing Egypt’s Defense Minister, Monsour’s interim government and the work of its constitutional assembly, The Post editorial pummels President Obama for supporting the “new autocracy in Egypt.” Obama seeks Congressional funds on their behalf. However, as even the remotest villager in Egypt can tell you, Mr. Obama does not support the democratic transitional leadership but stands squarely behind ousted President Morsi and his backers. Obama seems now to realize that because of his stance America has lost much of its influence in Egypt — not to mention respect — to Russia.

Obama now seeks to save face and preserve America’s military assets, including U.S. use of the Suez Canal, by honoring America’s contract with Egypt — finances tied to the March 26, 1979 Egypt-Israel Peace Treaty. This is Obama’s attempt to reverse his earlier decision against Egypt when, without valid reason, the U.S. President froze American aid. Alas, Egypt has other willing sources to replace lost aid.

There is an influence network in America defending the Muslim Brotherhood as moderates and, as such, obscuring Brotherhood supremacism and its criminal acts against Egypt’s sovereignty and its citizens. In turn, the genuine supporters of democracy inside Egypt are cast as aggressive evil-doers grabbing power from a benign and “elected” government. The Post synopsis leads us to believe that Egyptians could have waited for the next election cycle to vote Morsi out of the executive office as we are waiting in America. However, this would have been a fatal move for the cause of freedom in Egypt.

The viewpoint held by The Washington Post leads us in the opposite direction from the truth. The editorial uses misinformation that is commonly repeated throughout the Western media. Its misleading conclusions, which insinuate that terrorists are Egyptian fighters for a “genuine democracy” deprived now of their rights by arrest and imprisonment, contribute to the Muslim Brotherhood’s disinformation campaign around the world.