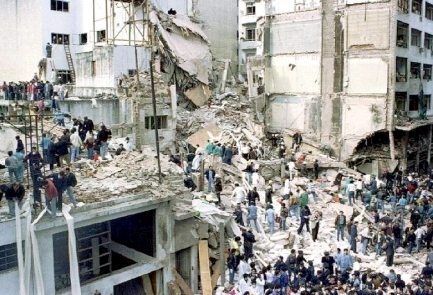 In 1994 a terror bombing of the Asociación Mutual Israelita Argentina (AMIA) building, a Jewish cultural center in Buenos Aires, killed 85 people, most of them Jews. It was the most deadly terror attack in Argentine history.

On May 30, 2013, after many years of extensive investigation Alberto Nisman, the lead prosecutor in the case, issued a 502-page report with his findings. He concluded that there was overwhelming evidence that the Islamic Republic of Iran was responsible for AMIA bombing. In the process of their work on the case, the investigators uncovered an extensive network of Iranian infiltration, not just in Argentina, but in all of Latin America, from the Caribbean Islands to Tierra del Fuego.

There are, of course, contrary opinions about who bears responsibility for the AMIA bombing. For an example, see this piece in The Nation, which asserts that there is no real evidence of Iranian culpability in the attack.

On the day the report was released, the Foundation for Defense of Democracies issued a 31-page summary (pdf) of the Nisman report. Excerpts from the summary will be published here in several installments.

The FDD press release on the report noted:

Argentina’s Prosecutor for the AMIA investigation Alberto Nisman released a ground-breaking report detailing Iran’s extensive terrorist network in Latin America. Focusing both on the 1994 bombing of the Asociacion Mutual Israelita Argentina (AMIA) center in Buenos Aires and more broadly on Iran’s use of cultural, religious, and educational centers as covers for illegal and terrorist activities, the report raises serious concerns about the ongoing threat to U.S. allies in the Western Hemisphere and globally.

Nisman’s 7-year investigation uncovered devastating evidence that the AMIA plot was orchestrated and planned by high-level Iranian officials including former Foreign Minister Ali Akbar Velayati and former Revolutionary Guard chief Mohsen Rezaei, both of whom are candidates in Iran’s presidential election to take place on June 14.

Nisman’s report also highlighted that Iran’s terror networks throughout Latin America were used as part of the thwarted 2007 attack on JFK Airport in New York, which experts say could have rivaled the attack on 9/11 had it not been uncovered. “Nisman’s investigation revealed how Iran exploits the vulnerabilities of America and our allies to set up illicit financial and terrorist networks. Policy makers around the world should draw on Nisman’s investigation and expertise to develop strategies to counter Iran’s global network,” FDD Executive Director Mark Dubowitz said.

Below is the introduction to the FDD summary report.

For the first time in the Argentine and world judicial history, it has been gathered and substantiated in a judicial file, evidence that proved the steps taken by a terrorist regime, the Islamic Republic of Iran, to infiltrate, for decades, large regions of Latin America, through the establishment of clandestine intelligence stations and operative agents which are used to execute terrorist attacks when the Iranian regime decides so, both directly or through its proxy, the terrorist organization Hezbollah. These actions have been taking place within the so-called “export of the revolution”, which was never masked by Tehran and is, in fact, written in their own constitution.

Throughout a lengthy and very strong indictment of more than 500 pages, released today [May 30, 2013], the General Prosecutor of the AMIA case, Alberto Nisman, based on countless reports, evidence, testimonies, court and investigative records related to other countries of the region, North America and Europe and rulings of foreign courts against the Iranian regime, was able to corroborate and strengthen with new evidence, the responsibility of the Iranian regime in the AMIA bombing, stressing — in particular — the higher degree of responsibility that Mohsen Rabbani and Samuel Salman El Reda had in the attack, taking into account that both have international arrest warrants and red notices from Interpol. Also, the Prosecutor proved the way in which the fundamentalist terrorism sponsored and financed by Iran operates and hides in Latin America, its networks and operational system.

This intelligence and terrorist network had already caused devastating consequences in Argentina in 1994 and almost struck again in the United States in 2007, when the blowing of fuel pipes and tanks of “John F. Kennedy” New York’s International Airport was dodged by the timely intervention of US law enforcement agencies, which — in this case — led to the arrest of the plotters and their conviction to life imprisonment. Several of those terrorist were veteran Iranian intelligence agents that were active in the region. Among them was Guyanese citizen Abdul Kadir, whose importance lies in his close relationship and hierarchical subordination to Mohsen Rabbani.

Throughout the investigation there have emerged strong traces of identical situations, this is to say, the establishment of intelligence bases and centers with clear operative capability to execute terrorist attacks, which could be replicating in several Central and South American countries and — according to what has been proved by the prosecution — represented and still does — no more and no less — the expression of a radical Iranian policy which has persisted unaltered for years and entails the dual use of diplomatic representations and cultural, religious and charity associations, in order to conceal illegal activities and objectives behind their legitimacy.

Such discoveries entitled Mr. Nisman, in compliance with judicial assistance and international cooperation agreements and also with counterterrorism and human rights treaties ratified by the Argentinian State, to send copies of this indictment to the pertinent judicial authorities of Brazil, Paraguay, Uruguay, Chile, Colombia, Guyana, Trinidad & Tobago and Suriname, since several pieces of evidence suggested that certain aspects of the Iranian criminal plan could be taking place within their territories. Also, a copy will be sent to the USA authorities within the Mutual Legal Assistance Treaty signed between both countries.

This new evidence incorporated in this investigation clearly shows that the AMIA bombing — beyond the motivations explained in Mr. Nisman’s indictment of 2006, that is, the disruption in the supply of nuclear material to the Islamic Republic of Iran — took place while Latin America was being strongly and aggressively infiltrated by Iran. In other words, the AMIA bombing did not constitute an isolated event and — therefore — it must not be conceived as a single picture. It has to be investigated and understood as a segment in a larger sequence, a part of a bigger image, where the terrorist attack that took place in Argentina, although dramatically relevant, constitutes a piece that requires a deeper knowledge of its context to be properly understood and unraveled. These conclusions are linked to the words of the First Commander of the Revolutionary Guards Corps, Javad Mansouri: “Our revolution can only be exported with grenades and explosives”.

It was demonstrated that in 1982 an important seminar was held in the Islamic Republic of Iran, attended by approximately 380 religious men from 70 different countries. This meeting was a turning point in the regime’s method to export the revolution, understood as the cultural, political and religious infiltration promoted to expand a radical and violent vision of Islam. In the seminar, it was concluded that the regime would use violence and terrorism to reach its expansionist objectives. And that is why Javad Mansouri called to turn each Iranian embassy into an intelligence center and a base to export the revolution.

This had special influence in what Mohsen Rabbani describes as an unexplored land with plenty of possibilities for the Iranian regime, in obvious reference to Latin America. As a consequence of what had been decided in the 1982 seminar, many relevant appointments were made the following year. In 1984 the mullah Mohammad Tabataei Einaki was sent to Brazil, from where he was expelled because of his involvement and links with the terrorist organization Hezbollah. In 1983, the Islamic Republic of Iran accepted Abdul Kadir as its agent in Guyana, who ended up convicted for the terrorist conspiracy to attack New York’s Airport. And also in 1983 the regime sent Mohsen Rabbani to settle in Argentina who, many years later, ended up seriously involved in the AMIA bombing.

Despite the Iranian involvement in the terrorist conspiracy to attack the New York airport, the crucial issue in this matter — based on the documents seized and shared with this investigation by the US judicial authorities — is the remarkable resemblance to the building and development of the intelligence and infiltration structures established in Argentina and Guyana since 1983, according to Tehran’s guidelines. That is to say, there is a distinctive feature within the terrorist pattern created by the Ayatollah’s regime, which is characterized by the dual use of diplomatic offices, cultural or charity associations and even mosques, as it was forewarned by the United Nations itself in General Assembly Resolution n° 51/210 (1996).

The intelligence and infiltration station fostered and financed by the Iranian regime had an important role in the AMIA bombing and, in this new indictment, it has been investigated, analyzed in its full dimension and documented with the most solid evidence.

This intelligence structure presented itself segmented in links: the embassy fulfilled its protocol and consular functions; mosques were in charge of religious activities and the local Muslim community received all these joint efforts. However, a deeply and more detailed scrutiny revealed the illegal side of this very same structure, which remained hidden under the legitimacy of the activities referred to before. So, embassies fulfilled a protective function by providing legal coverage and diplomatic immunity, they were ideal information exchange channels and also monitored eventual reactions of the local government. Mosques were used by the Iranian local leaders as recruitment centers, in search of people with alike radical ideas. Under these guidelines Mohsen Rabbani used the Embassy, the Cultural Attaché’s Office, many people who attended “At Tauhid”, “Al Iman” (Cañuelas) and “El Martir” (San Miguel de Tucumán) Mosques, the “front companies” such as Imanco and GTC, and indoctrinated local followers with his fundamentalist ideas, in order to make them functional to the regime’s objectives.

Besides revealing the characteristics of the Iranian infiltration method, in the AMIA file there are copies of foreign judicial rulings from cases investigated and judged in Germany, France, Switzerland, among others, which jointly with the conclusions of this new indictment, had allowed to document recurrent similar actions of infiltration, violence and terrorism in different countries and regions, which constitute nothing else but the expression and materialization of an Iranian regime’s policy that has remained unaltered for years.

From the assessment of the evidence gathered and detailed in this indictment have emerged strong traces that in several Central and South American countries, such as Brazil, Paraguay, Uruguay, Chile, Colombia, Guyana, Trinidad & Tobago and Suriname, activities alike those which were undertaken in our country before the 1994 attack could be carried out in those states, even with different degrees of development. These considerations have prompted the General Prosecutor in the AMIA case, in compliance with international commitments assumed by Argentina in matters of judicial assistance, international cooperation, counterterrorism and human rights, to send copies of this indictment to the pertinent judicial authorities of those countries.

5 thoughts on “The Iranian Infiltration of Latin America, Part 1”