Some positive news from Norway, for a change.

Back in February we reported on the case of a man in Kristiansand who had been convicted of a crime for leaving a pig’s head in front of a mosque. His act was a protest against the fact that complaints from Muslim patients had forced a hospital to take down a poster of the cartoon character Piglet.

The defendant appealed the case to a higher court, and with the help of SIAN (Stop the Islamization of Norway), his conviction was overturned on Friday.

Many thanks to The Observer for this translation from SIAN:

Muslims’ contemptuous attitude towards Piglet is nothing but an affront

The police got ‘whipped’ 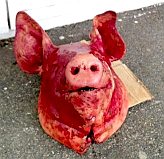 It took Agder Court of Appeals just
half an hour today to reverse the original verdict against Dan Eivind Lid (41) — who in February this year was ordered by the District Court in Kristiansand to pay NoK 20,000 in fines, or alternatively spend 40 days in prison — after he was found guilty of placing a red-painted pig’s head outside the mosque in the city in May last year.

Consequently the police received a proper ‘slap’ — as the judicial strategy chosen by the police prosecutors for this particular incident was completely wrong. The police are free to come up with a new criminal charge, but it is highly unlikely that they will choose to do so. Dan Eivind Lid is thus no longer a convicted individual. In a comment to Sian’s online newspaper, Lid says:

“This was a very satisfying outcome. I received complete redress — we won a victory over Islam’s disparaging and contemptuous attitude towards Piglet.”

It was the lawyer Bengt Waldow who represented Lid in court, while the police attorney Leif Aleksandersen represented the prosecution. Dan Eivind Lid says that he is very grateful for the fact that his lawyer took the matter seriously, but he would also like to add that he wants to thank SIAN for the support he received from the organization.

“Actually, I had almost given up. Without the support and help that I received from SIAN I would probably not stand here today.”

“But don’t you agree that it was distasteful to place the red painted pig’s head on the sidewalk outside the mosque?”

“No, I don’t agree with that statement. I had to do something drastic to draw attention to the violation and abuse that Norwegians suffered when Muslims were able to have the drawing of the pig (Piglet) removed. It was a violation of the Norwegian people. This entire case was about to get swept under the rug — thus it was necessary to act in such a manner that the media became interested in the case,” says Dan Eivind Lid, who don’t believe that this is the end of the matter. “The drawing should and has to be put back up again,” he says.

4 thoughts on “Piglet Vindicated in Kristiansand”