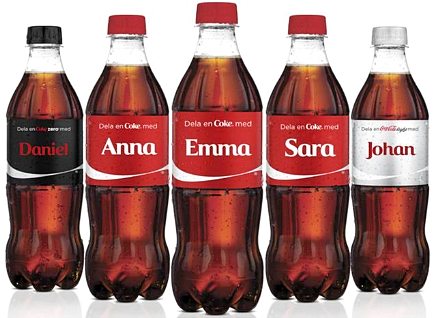 The Coca-Cola company has recently run afoul of Multicultural Political Correctness in Sweden, causing grave offense to Swedish Muslims — and possibly to all 4.8 octillion Muslims in the known universe.

One of our Swedish correspondents just sent this report:

Coca-Cola has launched a campaign in which the classic name logo has been replaced with the 144 most popular names in Sweden. The name Muhammad should not be involved, because Coca-Cola believes that the product is strongly associated with the U.S., and Muhammad is a name that may be offensive to the public because it is so closely linked to the religion of Islam.

The exclusion of the name Muhammad has angered at least one Muslim, and that is Mahmoud Aldebe — your old acquaintance, Baron, who is president of the Foundation for Culture and Integration (Ordförande för stiftelsen kultur och integration) and a former chairman of the Swedish Muslim Association (Sveriges Muslimska Förbund).

Aldebe is perhaps best-known for his desire during his time as a centrist (member of the Centre Party) to impose sharia law in Sweden.

Aldebe believes that Coke’s action is discrimination, and it is wrong to exclude the name when, according to him, not only it is associated with religion, but is a common name in Sweden today. The fact that there are hardly any non-Muslim parents who give their children the name Muhammad, Aldebe pretends not to be comfortable about.

“It is the largest Arabic name and it should be more visible,” says Mahmoud Aldebe.

7 thoughts on “The Pause That Offends”