The following report (partially allegorical) was originally published last Friday in the German-language section of Europe News. Many thanks to JLH for the translation.

In the late 1970s, a father bought his young daughter a baby crocodile for her birthday. The child was enchanted when she was handed the reptile, because she had seen pictures of them in her children’s books. 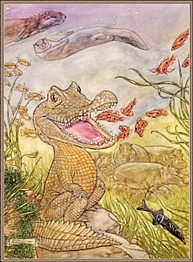 Overjoyed, she tried to kiss the crocodile, which thereupon bit her nose. The little girl burst into tears and had to be taken to the hospital. The angry father tried to get rid of the repellent little creature.

The next day, it was reported to the police that a strange creature was swimming in the Danube canal. The crocodile was rescued and the father was warned, as being ultimately responsible, that the crocodile could have gotten sick in the cold water.

Animal activists complained that the animal had been misunderstood and they demanded understanding. It was clear that it had only been defending itself.

Shortly after the crocodile episode, two Muslim terrorists armed with machine guns and grenades attacked a synagogue where a bar mitzvah was being celebrated.

One of the perpetrators, Mohammed Rajeh, was a mathematics student who had been living in Austria for two years. He and his accomplice, Marwan Hasan, shouted “PLO, PLO” as they were shooting.

Two months before that, two terrorists had been arrested at the airport after a Kalashnikov and hundreds of grenades had been found in their luggage.

The terrorists were deported and a formal protest was made to the PLO representative in Vienna, who was likewise thrown out of the country.

The Socialist chancellor of Austria at the time, Bruno Kreisky — despite his Jewish ancestry — liked terrorists and Nazis. His cabinet consisted of former Nazis, and he compared Zionism to Nazism.

Although the terrorists had shouted “PLO,” Kreisky let it be known that he was convinced the attack had nothing to do with the PLO, but on the contrary was sabotaging “Palestinian interests.” The “poor, unjust treatment of Palestinians in Israel is one of the reasons for such extreme actions.”

Kreisky was the first major Western politician to receive Arafat officially. He refused to hear the appeals of the Jewish community, and forged closer ties to the PLO.

Chancellor Kreisky delivered Vienna to the PLO and in the 1970s there were very many terrorist attacks, in which Jews were high on the list.

Today there are probably 500,000 Muslims in Austria in a country with a population of only 8.4 million. The percentage in Vienna is nearly 8%.

The Muslim population in Austria has doubled in a decade. It will double again considerably more rapidly. Half of the Muslims in Austria are younger than 25 — twice the proportion of the normal population.

By 2050, the majority of children and teenagers in Austria could be Muslim. The Vienna of the 1970s was a place with more dogs and seniors than children, but 4 decades into the future, it will have fewer dogs and many more children. The major languages will be Arabic and Turkish.

And if global warming really happens, there may even be crocodiles swimming in the Danube.