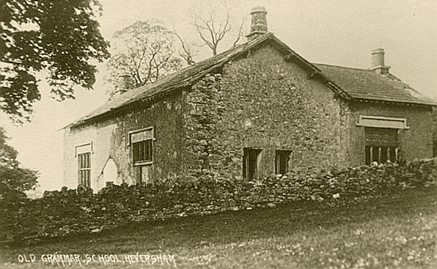 The English Grammar School: An Explanation
by MC

The comments sections on Gates of Vienna have recently included several references to the English Grammar School, and I note that there seems to be a notable number of contributors from this background, including, it would appear, the Baron himself.

When the socialists in the UK killed off the Grammar Schools in the early 1970s, they ended a system that had, over the past 300 years, made an academic education available to all and sundry provided that they had the ability. The institution had made a major contribution to the wealth and well-being of the nation

To get into a Grammar School one had to pass the 11+ exam, which comprised an English Language paper, an Arithmetic paper and an IQ test.

Having passed the test, one then attended a well-equipped and well-funded school that emphasised a good all-round academic education, for free.

In my years at a small-town Grammar School (founded 1775) in the South of England, there was a boy whose father drove round in a newish Bentley, and there was also one from the notorious “Riley Way” sink estate. In between were all sorts. There were no selection criteria other than passing the exam.

From the Grammar Schools a high proportion of students proceeded to University, whilst others took jobs in banking, the civil service, education and as officers in the armed forces.

I gained a commission in the Royal Navy, but was medically discharged, and ended up in IT.

The problem that the socialists had was ostensibly not with the Grammar Schools per se, but with the 11+. However, almost to a man, the opponents of the Grammar School system were from privately-schooled upper middle-class backgrounds, including the 2nd Viscount Stansgate (Labour member for Bristol South East) Sir Anthony Wedgewood Benn:

“Benn went to Westminster School and studied at New College, Oxford, where he read Philosophy, Politics and Economics and was elected President of the Oxford Union in 1947. In later life, Benn attempted to remove public references to his private education from Who’s Who; in the 1975 edition his entry stated “Education—still in progress”. In the 1976 edition, almost all details were omitted save for his name, jobs as a Member of Parliament and as a Government Minister” (Wikipedia entry)

This man, and his mentor Tony Crosland, were instrumental in the destruction of the Grammar schools:

Crosland was born at St Leonards-on-Sea, Sussex. His father, Joseph Beardsall Crosland, was a senior official at the War Office. Both his parents were members of the Exclusive Raven Taylor Plymouth Brethren. His maternal grandfather was Frederick Edward Raven (1837—1903), founder of the Raven Exclusive Brethren and secretary of the Royal Naval College at Greenwich. He grew up in North London and was educated at Highgate School and at Trinity College, Oxford. After obtaining 2nd class honours in Classical Moderations in Greek and Latin Literature, and his Masters (ibid)

A quote attributed to Crosland:

Susan Crosland claimed her husband had told her “If it’s the last thing I do, I’m going to destroy every fu***g grammar school in England. And Wales and Northern Ireland”, although close associates such as Roy Hattersley have doubted that the quotation is genuine. The outcome has been a source of controversy ever since. (ibid)

The demise of the Grammar School in the UK effectively slammed the door on poor children with academic ability.

The system was not perfect. In Manchester, 1 in 4 children got a place at a Grammar School; in rural Hampshire it was 1 in 11. Then there was the borderline situation, where schoolwork had to be submitted for assessment. There was also a 13+ exam to try to cater for late developers, but places were limited.

The 11+ itself presented an early hurdle for children to overcome and raised to an enormous degree the stress levels for 9-, 10- and 11-year-olds from “pushy parents”. The day I came home with “the letter” was a major relief from the huge anxieties of my 11-year-old (dyslexic) life.

The Left however, rather than improve a system that worked well, invented an experimental “one size fits all” system that has proved to be a most reliable source of social indoctrination rather than any form of education.

Grammar Schools had their roots in the 15th century institutions set up to teach Latin to selected children showing academic promise. An early example of a municipal foundation is Bridgenorth Grammar School (1503). In 1553 King Edward VI, the first totally Protestant King of England, gave the system a huge boost in setting up the Bridewell Hospital (Now King Edward’s School Witley) along with Christ’s Hospital (both are now private schools although still providing free and supported education for children from poorer backgrounds but with academic promise) as well as St Thomas’s Hospital (now a true hospital).

In the next 200 years the Grammar School became almost universal and opened opportunities for many poor children across the country. My mother-in-law, number 8 of 9 children from an impoverished Jewish household in Greenwich, London, got a place at Plumstead High School much to the delight of the whole community, and no mean achievement for a young immigrant female child of the time. Her parents spoke Yiddish and were from Eastern Europe; she had learned English from the street and from the “board school”.

The Grammar School gave many of us a first-class education free of charge, maybe without the “bells and whistles” of the major Public Schools such as Eton and Harrow.

But then, “my people are destroyed through lack of knowledge” (Hosea 4 v 6) — and knowledge we got!

19 thoughts on “The English Grammar School: An Explanation”