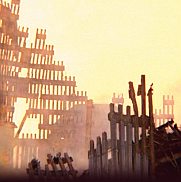 For the past ten days I’ve been reporting on a sporadic email conversation that I’ve been having with a British journalist, which culminated on Wednesday in a debate over whether I had been “robbed of my humanity” by my political views.

This morning saw what will probably be our final exchange of emails. The journalist sent a brief message in response to my latest email; the text of what he said is below (in italicized block quotes) followed by my response.

Thanks again for your reply. My sheen of politeness did slip. I’m afraid I’m rather emotional about this. I know too many mothers and fathers; sisters and brothers; friends and survivors.

Well, then we have something in common: I know a lot of the families of victims, too.

I know any number of people who lost friends and family in the World Trade Center on September 11, 2001.

I know an Indonesian woman whose lost eight family members when a Catholic church was barricaded with the congregation inside and burned to the ground by a Muslim mob.

I know an Egyptian woman whose husband was killed by a Muslim mob attacking a Coptic church.

I know a man whose Pakistani cousin was shot dead for his “blasphemy” by Islamic zealots.

I could continue, but it would be tedious. Suffice it to say that a hundred times as many people as Breivik killed are slaughtered every year by Muslims acting in the name of their prophet and their god. I am not making these statistics up; they are on the public record.

You will find yourself unable to claim any moral high ground when discussing these issues with me, just because you happen to know the families of some of Breivik’s victims.

The number of victims of Islamic torture, maiming, rape, and slaughter increases by hundreds every day. Their souls cry out for redress, for justice, for recognition of what has been done to them in the name of a so-called “religion”.

But you and your fellow respectable mainstream journalists decline to acknowledge what has been done to them in the past, what is happening to them now, and what will happen to more of them in the future.

You prefer to concentrate on easy targets, on sitting ducks, on people like me and Fjordman, just because we do our best to warn people of the dangers of Islamization and Islamic law.

You risk nothing by coming after us. We will not hire gunmen to cut you down in the street nor incite a mob to burn down your home.

So it’s not hard to choose your topic, is it?

Because of what we do, some of us are fired from our jobs and hounded into seclusion. Some of us are driven from our countries; others are attacked in the street. Some are even killed for doing it.

The Danish historian and journalist Lars Hedegaard narrowly escaped assassination on February 5, less than a month ago. Did you hear about that? No? Not surprising — since your fellow mainstream “journalists” failed to cover it.

Why is it that you prefer to waste Fjordman’s time, and mine, and your own, by pestering us about our “involvement” in the Breivik massacre, when you could be informing the world that someone attempted to kill a peaceful Danish journalist just because of what he chose to write about?

Lars Hedegaard is one of your own, a fellow writer seeking after truth, who now must live in hiding, protected by armed state security, simply because of what he says and believes in.

Why do you persist in badgering Fjordman and me, who are nothing, who are inconsequential in the larger scheme of things, when you could be reporting about Lars Hedegaard?

You could begin with him and work your way up to tackle the single greatest threat that Western Civilization has ever faced. That would be a worthwhile use of your talents, skills, and time. Yet you choose instead to go haring off after inconsequential chimaeras.

O Faustus! leave these frivolous demands,
Which strike a terror to my fainting soul.

20 thoughts on “Leave These Frivolous Demands!”