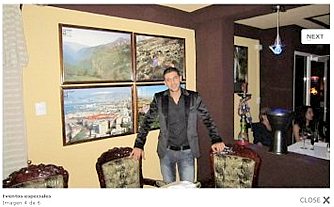 As mentioned here many times in the past, the southern border of the United States is porous not just to Mexicans, Salvadorans, and Guatemalans, but also to Islamic terrorists. Operatives from Al Qaeda and Hezbollah acquire a Latin American passport and enough Spanish to allow their swarthiness to pass as Latino.

This latest report concerns the arrival of a Hezbollah associate in Mexico. Many thanks to Iz-M (via Vlad) for the translation from Diario de Yucatán:

More signs of the presence of Hezbollah

Labboun Rafic Mohammed, the Muslim cleric allegedly linked to Hezbollah and a fugitive from U.S. justice who was arrested in Merida on September 8, 2012, arrived at Yucatán immigration through a network of Lebanese government officials in collusion with Belizeans who gave him a fake passport from that country.

As we reported at the time, upon his arrest by officers of the Public Security Secretariat Yucatecan government, Labboun exhibited a Belizean passport in the name of Wilhelm Dyck, a Mennonite child born in that country in February 1976 who died two months later. A driver’s license was issued in the same name.

Yesterday we reported that Razur Antonio Elias, the director of the Mexican Drug Observatory investigating Islamist organizations associated with Mexican drug traffickers and their possible ramifications in the Yucatán Peninsula, said that this group of people offered Belizean passports for $ 25,000, with a birth certificate and fake driver’s license.

In addition to these documents, the group organizes the transfer of these people with forged documents through Mexican territory to the U.S. border, where the city of Merida, it seems, is key to the logistics.

The detention of a Lebanese with a Belizean passport has set off alarm bells.

Although Labboun Rafic Mohammed, arrested in September in Mérida, is a radical Islamist hardliner and a follower of Ayatollah Khomeini, the U.S. authorities had failed to demonstrate his links with Hezbollah terrorist activity, until recently.

New data from this case, however, point to the possible presence of the Islamic group backed by Iran and Syria in some areas of the Yucatán Peninsula.

3 thoughts on “Hezbollah in Yucatán”