In some districts of Berlin, German is no longer the first language of most schoolchildren. In many cases it isn’t even their second language, and sometimes they don’t speak it at all.

Many thanks to Hermes for translating this article from Sunday’s B.Z.:

The number of kids having problems with the German language is especially high in Moabit, Wedding, Kreuzberg and Neukölln 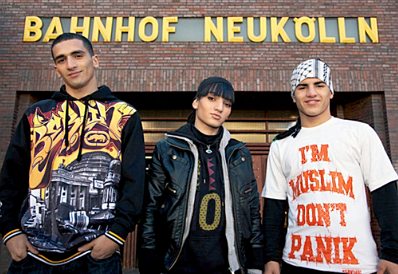 More and more kids in Berlin are going to school without knowledge of the German language, because no one speaks German at home. This is revealed by a survey about pre-school education conducted by the Federal State’s statistical office. According to the survey, there are 34,254 families in Berlin with pre-school children in which nobody speaks German, that is, a quarter of all families. This adds up to 81,270 children under six years old.

The percentage of children with a low level or even non-existent knowledge of German is particularly high in the neighborhoods of Heidestrasse (Moabit), Reinickendorfer (Wedding), Askanischer Platz and Wassertorplatz in Kreuzberg, as well as Silbersteinstraße and Treptower Straße Nord in Neukölln. In those places more than 80% of pre-school children speak German poorly, or not at all. In 45 neighborhoods, mainly in Neukölln, Reinickendorf and Wedding, the level is 70%.

One thought on “Babel on the Spree”