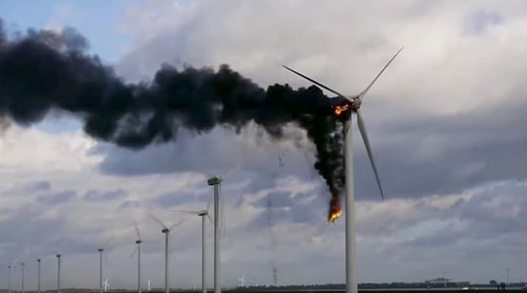 The environmental damage (e.g. by the mining of lithium) caused by the push for electric vehicles is well-documented. The following article reports on another noxious side effect of “green” energy: pollution caused by the sulfur hexafluoride used in wind turbines.

Many thanks to Hellequin GB for translating this article from Der Wochenblick. The translator’s comments are in square brackets:

One of the long-known but little-noticed consequences of the expansion of wind turbines, which has been pushed by hook or by crook, is the fact that wind turbines contain the chemical compound sulfur hexafluoride (SF6) as an insulator. This contributes more to the greenhouse effect than all German domestic flights, and is not called a massive “climate killer” for nothing. This connection is ignored or even hushed up by green wind power fetishists.

SF6 is not only 22,800 times more effective than the same amount of carbon dioxide, it also remains in the atmosphere for over 3,000 years before it decomposes again. 25 years ago the Kyoto Protocol stipulated that SF6 emissions must be limited. However, there is still no legal basis for this, only a voluntary commitment by the industry to only use the substance in closed systems and to recycle or chemically neutralize it at the end of its life. In addition, the quantities used and recycled are to be recorded and reported.

Much of the contamination is airborne

However, scientific studies and the Federal Environment Agency came to the conclusion that more than 50 percent of the reported SF6 is in the air in Europe. So the data reported by the industry must be grossly wrong. Research by the ARD magazine “Panorama” — which is guaranteed to be harmless in terms of its political orientation — revealed that every owner of a wind turbine that is to be dismantled must take care of the SF6 recycling himself. Since there are no corresponding controls, it makes sense to simply let the substance escape into the air.

The wind turbine manufacturers Nordex and Vestas claimed that there are currently no alternatives to SF6, minimal amounts of SF6 are released into the air during operation of wind turbines and proper end-of-life disposal of wind turbines is assured. [Will SF6 be the next gummi-bear flavour?]

Alleged lack of alternatives only a result of the price war

The alleged indispensability and lack of alternatives to the material is probably mainly due to the price war among the wind turbine manufacturers, which does not allow any expensive changes. In fact, both Siemens Energy and various suppliers of high-voltage switches used in small substations have developed climate-neutral alternatives to SF6.

The EU is now aiming to restrict and then ban SF6. A transition period until 2030 is currently planned. However, it is again questionable whether the possibly extremely rising costs for wind turbines as a result will drive the desired expansion, which, however, will not be sufficient in any case to replace Germany’s loss of nuclear and coal energy. This adds another to the countless absurdities of German climate policy. Because with its wind power course, it remains the worst air polluter in Europe for the time being.

The green ideology (or should that be idiocy?) is clear cut. We also can’t confuse them with the facts; their little pea-brains would explode and then we really would have a serious environmental disaster on our hands. The biggest problem I can see for humanity and the planet as a whole is that this specific breed of “people” are heavily infested with an STED (Systemically Transmitted Educational Disease) called ACADEMENTIA. Only the complete eradication of the host itself can save us.