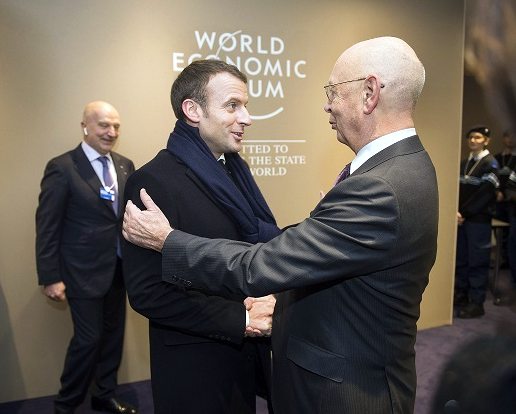 I’m talking about Klaus Schwab, actually, and not Emmanuel “Toy Boy” Macron. Mind you, it would be nice to see Marine Le Pen succeed Junior. If for no other reason, it’s unlikely that we’ll ever see her in a fond embrace with the Guru of the Great Reset.

Many thanks to Hellequin GB for translating this article from Corona Transition:

Who takes over the throne from Klaus Schwab?

The big maneuvers to succeed Schwab as WEF leader have begun. Why ICRC President Peter Maurer has the best chance.

The big maneuvers to succeed Klaus Schwab at the head of the World Economic Forum have begun. On March 30, the great Sultan of Cologne turned 84, and the burden of the years has left its mark on him, too.

Who could follow Schwab? This is of course one of the most sacred taboos of international Geneva. Those who have tried to break it have stumbled. All envisaged sequels, including those that the grandmaster himself brought into play, became history pretty quickly. Some of them because they put Schwab in the shade too much. We remember, for example, the head of a multinational company or a former president — their names disappeared from the spotlight at the WEF as quickly as they appeared there…

The governance of the WEF, which has now become an international organization with ad hoc status, is indeed problematic for an international body that should apply to itself the rules of transparency and democracy demanded everywhere else. The laws of the private sector only apply to a limited extent in the WEF. Klaus Schwab has headed the forum, which was founded in 1971, for 52 years. He has been in office twice as long as Putin, whose longevity is currently a popular subject of criticism. Only Kenneth Roth cuts a similarly good figure in Geneva. He has run Human Rights Watch with an equally iron fist for 29 years. So, monarchical governance is not exclusively Russian.

However, things could change soon: in September, Peter Maurer, the current President of the ICRC, will hand over his office to the diplomat Mirjana Spoljaric Egger. The nearly 65-year-old Maurer is a member of the WEF Council and acted as guarantor in the transformation of the WEF from a private NGO into a public international organization. It would only be logical for Maurer to assume the position of Grand Vizier Schwab, bearing in mind that a place of honor must be reserved for the outgoing ruler. A constitutional monarchy might emerge.

The image of the WEF is not exactly in good shape. The institution has become a symbol of oligarchic globalization and the Great Reset ideology, and accordingly the butt of the wrath of “conspiracy theorists” on social media.

From this point of view, Peter Maurer, a Tony Blair-style social democrat, would do wonders for the Forum’s reputation: Maurer is perfectly compatible with the culture of big multinationals and “inclusive capitalism,” another typical cream cake of WEF phraseology. In any case, the Americans will like him because he has refrained from bothering them about Guantanamo and the war crimes in Iraq and Afghanistan. With the Americanization of the ICRC, whose headquarters are increasingly resembling a California campus, he has managed to seduce the United States completely.

In addition, Maurer speaks German — even Bernese German. He speaks it as well as the French of Geneva’s private banking district. An ideal candidate, one has to admit! If the WEF had voting rights, I would vote for him.

I would prefer a complete dismantling of the organization, with all their ill-gotten assets given back to the people and imprisonment for all their members and acolytes around the world at the bottom of the Mariana Trench. In short — JUSTICE, for a change.

4 thoughts on “Who Will Succeed Him?”

Leave a Reply to One of the Quiet Ones Cancel reply