The following post is a personal side journey. It’s unrelated to the mission of this blog, so if you don’t want to stray from the main track, you may want to skip it. 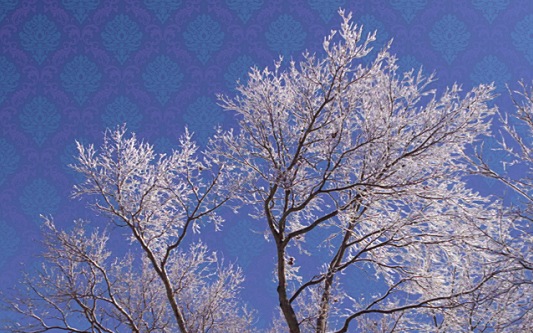 Spending my sunset years as a Counterjihad blogger was not part of my life’s plan. I just kind of fell into it, joining Dymphna at the task after I was laid off in 2006. It seemed like a worthwhile endeavor, so I kept at it full-time for the next sixteen years (and counting).

Before that I had pursued numerous occupations since I graduated from college: taxi driver, tuxedo store manager, messenger for a legal firm, mathematician/programmer, systems analyst, sign painter, painter of ceramic cups, Kelly Girl, seller of mistletoe (seasonal only). I took all of those jobs just to keep the wolf from the door while I did the two things I was put on this earth to do: paint landscapes and write poetry.

I was fortunate enough to be able to paint for a (meager) living for more than twenty-five years. And I was especially fortunate to have married someone who understood my drive to create, and who was willing to help support me via her own employment. For that I will be eternally grateful to Dymphna; may she rest in peace.

As you all know, I ruined my eyesight by sitting outside in the bright sun day after day for decades. My intuition tells me that having my retinas bathed in so much ultraviolet light for all those years brought on macular degeneration at a relatively early age. Since I gave up painting in 2005 I have been reduced to programming digital images on the computer to satisfy my visual creative urge.

When I was eighteen years old I started writing poetry seriously — or as seriously as a callow clownish youth can do at that age. Almost everything I wrote before I was in my mid-twenties was dreadful stuff, and embarrassing to look at now, but a few things were worth saving, and have held up over the decades. By the time I was in my late thirties the quality of what I wrote was more consistent. I really hit my stride in the mid-’90s and early 2000s.

I encountered a fallow period after 2006, when the muse abandoned me for eleven years. I thought she was gone for good, and that my poetic career was over. Then in 2017 she mysteriously returned, and I started writing verse again. At that point it occurred to me that it might be a good idea to self-publish a volume of selected poems.

I gave up submitting my poems to periodicals thirty years ago. By then it had become clear that the type of poetry I write — traditional forms, often with a rigorous rhyme scheme and metrical structure — was out of step with the post-modern age. I got tired of the rejection slips, so I abandoned all attempts at publication. I haven’t published anything since a number of my poems (most of them lousy) appeared in William and Mary’s literary magazine back in the early 1970s. 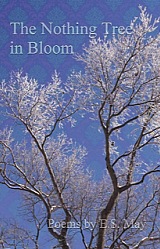 Until now, that is. Thanks to the magic of self-publishing, I was able to put together a selection in a book entitled The Nothing Tree in Bloom. It contains all the poems from a fifty-year period (1970-2019) that I consider worth reading, and is listed on Amazon.

Self-publication turned out to be very easy, and it cost almost nothing, unlike vanity publishing. Actually, I suppose it is a form of vanity publishing, because I don’t really expect to sell any copies of the book. I just bought a few dozen author’s copies at a low price to give away to family and friends. It’s a satisfying way to wrap up a lifetime’s worth of work in a meaningful fashion. As Wallace Stevens said (in “The Lack of Repose”), the book provides “A few sounds of meaning, a momentary end / To the complication”.

I dedicated The Nothing Tree in Bloom to Dymphna. It makes me sad that she didn’t live to see it published, but she did read an early PDF version of it, which included the cover design. At that point the dedication page read: “For my wife”. In the published version it reads: “In memory of my wife”.

Since I’ve never published any poems since college, I’ve never had an editor. Fortunately, for forty years I had Dymphna to act in that capacity. As most of you know, she was an accomplished poet in her own right.

From 1979 until her death she read everything I wrote, including the most recent poem in the book. She was an incisive reader and critic, and never hesitated to point out infelicities and suggest changes. My oeuvre would have been far less competent without her input.

It was my habit to read every poem out loud to her as soon as I finished it. In later years, as her hearing deteriorated, I would print out a second copy so that she could follow along while I read it. After she died I found a pile of many years’ worth of those printed pages on the bottom shelf of the bookcase next to her side of the bed.

When I was a teenager attending an English grammar school, I was required to study large quantities of poetry in depth for my O-level and A-level exams. It was like discovering a magnificent palace filled with treasure, and I took to it as if it were my natural environment. At the time I didn’t understand that most of my fellow students experienced it quite differently: it was just something they had to do, to memorize and analyze long enough to pass their exams, and then gratefully forget.

In the ensuing years I’ve learned the hard lesson that poetry is an acquired taste. Most people don’t get it, and aren’t interested in getting it. And that’s especially true of the type of poetry I prefer to write, which admittedly is intellectually abstruse.

With that in mind, I’ve chosen two examples from the book to post here that are somewhat more accessible.

As a general rule, I don’t explain my poetry, but I sometimes make an exception when providing technical details. The poem below (written in 1994) is a sonnet in iambic pentameter with a strict rhyme scheme. However, it is neither Petrarchan nor Shakespearean, but a sort of hybrid form. The rhyme scheme (ABBA CDDC EFEFGG) is one that for some reason appeals to me, and I’ve used it in any number of sonnets.

What do they have that makes us worship them,
All those august men, calm in hose and robe:
Copernicus, his hand athwart the globe,
Or Newton, piling theorem on theorem?

Mute Galileo stands, and yet he moves!
What force has he that we mere mortals lack?
Or Gutenberg: his hand cranks out the stack
On which we swear how much our lot improves.

Marconi’s voice is heard no more, and Baird
Does not appear upon our flickering screen.
And yet through them our common life is shared,
The mirror of ourselves so clearly seen.
And all the praise of A. G. Bell we sing
Is carried on the wires he helped to string.

I’ve written in all of these forms, including strictly rhymed and metered forms that I devised myself. To satisfy my aesthetic sense, however, even free verse requires a compelling rhythm; poems that lack a good rhythm just don’t work.

To my mind, the most difficult form in English poetry is the villanelle, an archaic tradition that was revived and mastered in the 20th century by the late poet William Empson (who was also the author of Seven Types of Ambiguity). I’ve included one villanelle in The Nothing Tree in Bloom.

The second example posted here (written in 1989) is in free verse:

An Accord of Repetitions

The human soul is a hall of mirrors
of indefinite extent, so that
the speed of light becomes significant.
This afternoon when you set the table
the rebounding image of your mother came
and laid the napkins by the plates.

Sound is carried, too: your father’s voice
rounded the last corner, bounced off the wall,
and left through your open mouth
when you said, “Maybe, but I don’t think so.”

The images fade, but never disappear.
A pale translucent copy of your great-grandmother
paces back and forth in sequential inversion.
And what of the feral ancestor from forest or savanna
who awakens in the middle of the night,
hair bristling, sheened with sweat, to the terror of being?

Today, crossing the field,
when I held the hand of my small son and said,
“Look at the deer,” I found myself beckoning
to two or three full-grown great-grandchildren
ninety years on.

Within twenty-four hours of launching my most recent fundraiser in the summer of 2020, I was shut down by PayPal for political reasons. I postponed any further fundraising until I could find another payments service that seemed appropriate and reliable. In the interim, the only donations I have received have been by snail mail. I’m thankful that so many people have kept sending them in, despite my not holding a formal fundraiser.

I was tentatively planning on signing up with GiveSendGo, but then they were hacked — twice — the first time last year, and then more recently during the Freedom Convoy in Canada, for which they became the principal fundraising platform. I can’t risk the doxxing of Gates of Vienna donors, so for the time being I won’t be using GiveSendGo.

Some months ago one or more readers suggested that I self-publish a book and sell copies of it as a means of fundraising. At that time The Nothing Tree in Bloom was already in the works. I’ve managed to overcome the gumption traps that had delayed its publication, so that it is now finally available.

If you’re interested in seeing the other ninety-six poems collected in The Nothing Tree in Bloom, the Amazon link is here. When I manage to get my act together, I’ll put a permanent link to it on the sidebar. And when I finally hold a formal fundraiser, it will be listed as another possible way to make a donation.

NB: There is no political content whatsoever in my poetry. I consider political matters to be ephemera that are unworthy of poetic attention. If you’re looking for political material, you’d be well-advised to forgo the book.

15 thoughts on “The Nothing Tree”