A Portuguese reader named “Orwell” took this photo and sent it to me: 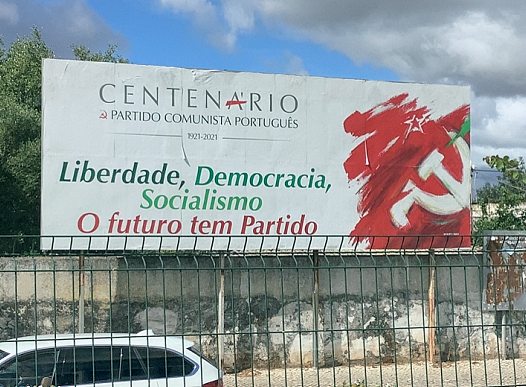 I just saw this huge billboard today! In the town of Loulé in the Algarve [southern coast of Portugal].

Just look at that! Hammer and sickle, and a pool of blood. This is openly going on in Portugal in 2021. No one bats an eye.

I guess the splash of red is the blood of some of the 200+ million people they have already murdered.

In Portugal just a few weeks ago, they sneaked in a new law, passed without any democratic assessment, a law on the expropriation of private property. Now without rhyme or reason, at the whim of some state commie bureaucrat or commissar, your private property, house, land, apartment can simply be confiscated from you!

They are moving quickly towards outlawing private ownership of property in Portugal.

Where else in the world has communism reached the venerable age of 100 while still being celebrated? Russia observed the centennial of the Revolution in 2017, but I’m not sure the celebration was universally enthusiastic. China and North Korea haven’t reached a century yet…

11 thoughts on “Celebrating a Century of Communism”