David Boyajian sends this report on the latest instance of Azerbaijani aggression towards Armenia. 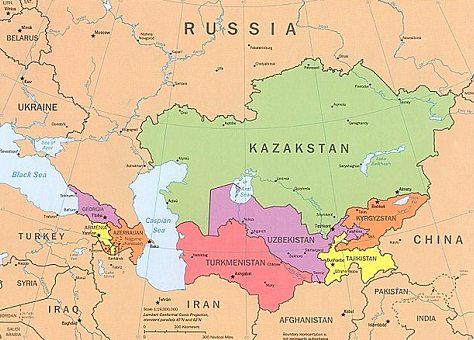 Map of the Caucasus and Central Asia (Wikimedia Commons)

“The Caucasus is Ground Zero in the New Cold War between the U.S. and Russia.”

I wrote that several years ago, and it’s still true, particularly after Christian Armenia decisively repulsed a mid-July attack by Muslim Azerbaijan.

Perhaps dozens of Azeris died in the battles, including a major-general, colonel, and two majors. Armenia reported far fewer deaths and captured a new defensive position, even though Azerbaijan possesses a bigger arsenal, quadruple the GDP, and more than triple Armenia’s population.

Azerbaijan attacked Armenia’s northeastern border and has done so before. Typically, though, Azerbaijan attacks Artsakh (Karabagh), the de facto-independent Armenian-majority region that voted some thirty years ago for freedom from Azerbaijan, which rejects that vote.

Soviet dictator Joseph Stalin deceitfully annexed Artsakh and the ancient Armenian region of Nakhichevan to Azerbaijan in the 1920s. Far from being ancient itself, Azerbaijan was invented only in 1918.

Why should any of this matter to the rest of the world?

Armenian-Western relations go back thousands of years. The US/NATO/EU (we’ll term it the “Western Bloc”) has been very friendly to Armenia and Artsakh and aided them economically for decades.

Landlocked Armenia, however, depends on Russia for most of its gas and weapons. Moscow also controls much of Armenia’s energy network.

Armenia (population 3 million), nevertheless, remains under threat from Azerbaijan (population 10 million) and Turkey (population 82 million) since the USSR’s dissolution in 1991.

Turkey committed genocide against Armenians in 1915-23. The Armenian Highlands and everything else Armenian, particularly in what are now eastern and southern Turkey, were destroyed or confiscated. Azeris joined in that genocide in the Caucasus.

Turkey and Azerbaijan (motto: “two countries, one nation”) won’t come to terms with Armenia’s existence. Azerbaijani President Ilham Aliyev says all of Armenia should be part of Azerbaijan — without Armenians, of course.

Turkey is still enamored with pan-Turkism, just as during WWI and the Armenian Genocide. Turkey envisions leading a federation that includes Azerbaijan and the Turkic-Muslim countries of Central Asia (Kazakhstan, Kyrgyzstan, Turkmenistan, and Uzbekistan) — all the way to China’s Xinjiang Province.

Armenia is a geopolitical impediment to pan-Turkism. That’s a key reason Russia needs Armenia. Russians are too proud to admit it though.

However, Russia has increasingly been cozying up to Azerbaijan and Turkey. Therefore, despite the Armenian-Russian mutual defense treaty and a Russian base in Armenia near the Turkish border, Armenia isn’t always certain of Russian support, particularly against Azerbaijan.

Azerbaijan has violated the ceasefire agreement between it and Armenia/Artsakh thousands of times since 1994. Armenian forces are in defensive mode. They have little reason to violate the ceasefire. Azerbaijan rejects proposals for installing autonomous gunfire-detection equipment on the line of contact.

President Aliyev refuses even to negotiate with Artsakh, a stable democracy. That’s hardly a recipe for peace.

In 2004, Azeri serviceman Ramil Safarov axed to death an Armenian lieutenant in his sleep at a NATO exercise in Hungary. He was sentenced to life and imprisoned. Hungary eventually released him to Azerbaijan which welcomed him as a national hero. Armenian civilians have been tortured and beheaded by invading Azeri soldiers.

To ‘prove’ Armenians never lived in Nakhichevan, in 2005 the Azerbaijani military used pickaxes and dump trucks to destroy thousands of iconic headstones in a ninth-century Armenian cemetery. It was caught on video.

During the twentieth century, Azerbaijan emptied Nakhichevan of its Armenians and was doing similarly in Artsakh before Armenians put a stop to it.

No wonder Artsakh says it will never again submit to Azeri rule.

Turkey was set to invade Armenia in 1993 during a coup against Russian President Boris Yeltsin led by Ruslan Khasbulatov, the pro-Turkish Chechen and Supreme Soviet speaker. Fortunately, the coup failed.

In 1993, Turkish President Turgut Ozal threatened Armenia “in case they had not learned their lesson in 1915.”

Turkish President Erdogan recently menaced Armenia using a backhanded reference to the 1915 Genocide: “We will continue to fulfill this mission, which our grandfathers have carried out for centuries, in the Caucasus again.”

Yet the Western Bloc has said and done nothing to restrain Turkey.

Turkey denies reports it will send jihadists to fight for Azerbaijan. In the past, however, Turkey has sent its Grey Wolves, and Azerbaijan has recruited Afghan/Pakistani/Chechen mujahideen, to battle Armenians.

President Aliyev once compared Azerbaijan-Israeli relations to an iceberg: “Nine-tenths of it is below the surface.”

Israel sells Azerbaijan billions in advanced weapons (many used against Armenia and Artsakh) while Israel gets 40% of its oil from Azerbaijan and facilities to spy on and counter Iran.

Azerbaijan’s “lobby in the U.S.,” revealed Aliyev, “is the Jewish community.”

It’s reminiscent of the way Jewish American organizations — ADL, AIPAC, AJC, and others — have colluded with Turkey and Israel (in friendlier days) to hypocritically deny/diminish the Armenian Genocide and defeat Armenian Genocide resolutions in Congress.

Under relentless pressure and against all odds, Armenia and Artsakh continue to hold out against foreign actors who wish to deny them their very existence.

Regardless, from a practical, if not moral, standpoint, the Western Bloc and Russia should rein in Azeri and Turkish aggression unless they wish to see the region explode.

14 thoughts on “Avoiding World War III in the Caucasus”