Below is David Boyajian’s latest report on the persistent refusal of the Anti-Defamation League to officially identify the 1915 massacre of Armenians as a genocide. 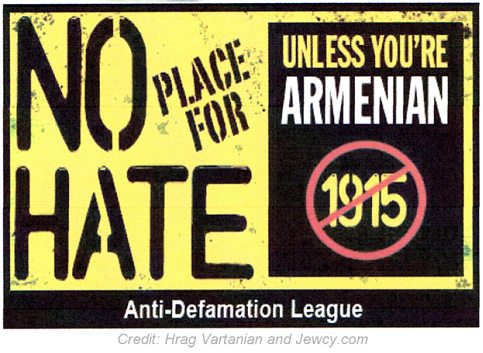 Why did I testify at the Massachusetts State House on Oct. 7 against legislation that would require public schools to teach the Jewish Holocaust, Armenian and Greek Genocides, and other genocides and “atrocities”?

Good question, especially as I’m an Armenian-American journalist and activist. My Christian grandparents landed on these shores over 120 years ago.

This article goes far beyond Armenian American issues. It’s about how the ADL and similar groups intimidate and/or hoodwink respectable American organizations, schools, and institutions.

The ADL continually demands worldwide recognition of, reparations for, and legislation on the Holocaust.

Jewish, Israeli, Turkish, and American media have outright admitted this. So did a fine man, the U.S. Holocaust Memorial Museum’s Chief of Staff, William S. Parsons (now deceased), in a personal conversation with me. He was distressed by it.

Such blatant hypocrisy renders the ADL unfit to author legislation or pontificate on any genocide.

Yola Habif Johnston of the Jewish Institute for National Security Affairs (JINSA) disclosed in 2006 that AIPAC (American Israel Public Affairs Committee), American Jewish Committee (AJC), B’nai B’rith, and JINSA “have been working with the Turks on this issue” for more than 15 years.

“The Jewish lobby has quite actively supported Turkey in their efforts to prevent the so-called Armenian genocide resolution from passing.”

These Jewish groups would demand apologies and more from any mainstream organization that treated the Holocaust like that. But they had few qualms about demeaning the Armenian Genocide.

We aren’t blaming these Jewish organizations’ rank-and-file supporters, who have often expressed disgust with their organizations’ hypocrisy. We fault their leaders.

In 2007, I publicly blew the whistle on the ADL’s war against Armenian-Americans. Many principled Jews and other non-Armenians joined in. The resulting scandal exploded across national and international media.

Turkey hurled accusations at Israel because the conspiracy among certain Jewish organizations, Israel, and Turkey to do the latter’s dirty work had been unmasked. At that time, relations between Israel and Turkey hadn’t yet soured.

Grassroots Armenian Americans and others did most of the heavy lifting, though, and quite successfully.

Consequently, from 2007 to 2008 a dozen Massachusetts cities and the Massachusetts Municipal Association (which represents the entire state) evicted the ADL’s alleged anti-bias program “No Place for Hate.”

Rarely had the ADL been slapped in the face so hard and so publicly.

New York, Michigan, and California saw similar, though lesser, actions against the ADL.

But like nearly all American organizations that criticize the ADL (and other powerful Jewish political groups), the two Armenian American advocacy groups worried about probable retaliation.

So in mid-to-late 2008 ANCA and AAA dropped out of the campaign. Nevertheless, a small group of activists, including myself, carried on.

Berman subsequently acknowledged he failed to criticize his organization’s genocide hypocrisy prior to 2007. He was grilled on this and other shortcomings by the elected Governor’s Council, which ratifies judicial nominations. I testified against Berman.

In 2014, despite the backing of the entire Massachusetts political, legal, and media establishment, Berman lost. We activists — without ANCA/AAA support — won a stunning victory over the ADL. Don’t let anyone tell you groups like the ADL can’t be beaten.

Two years later I alerted ANCA and AAA that predominantly Jewish Newton, Mass. had — perhaps unintentionally — brought an ADL program into its schools despite having thrown out the ADL in 2007.

They’re good people and have helped the Armenian American community in many ways. But in 2016 they made a pathetically weak deal with ADL CEO Jonathan Greenblatt. He acknowledged the Armenian Genocide but only in a “blog” post, not a formal organizational declaration.

The “blog” also said the ADL “would support” — not does or will support — an Armenian Genocide resolution.

The rest of the deal has never been made public.

Andrew Tarsy was the New England ADL Director who was fired in 2007 because he acknowledged the Armenian Genocide. “Inadequate” was what he rightly termed the ADL’s 2016 deal with ANCA/AAA/Koutoujian.

The ADL, said Tarsy, “ought to lead the conversation about reparations for these [Armenian] families… assets, land… everything that Holocaust reparations… has represented.”

We activists fought and wrote against the bad deal but to no avail.

The ADL’s only “support” for the Congressional resolution came in a letter three years later — a mere 24 hours before an overwhelmingly positive October 2 House resolution vote (405-11) whose success was already assured.

In 2007 Armenian Americans had demanded that as partial moral reparations the ADL must advocate as hard for an Armenian Genocide resolution as it has for Holocaust legislation. The ADL never did so.

Nor has the self-centered ADL ever apologized to Armenians or made amends.

Regardless, the ADL’s chance to do the right thing expired years ago.

I place the onus for ANCA/AAA’s weak-kneed 2016 ADL deal on Sheriff Koutoujian. Like so many ambitious American politicians, he has openly allied himself with numerous Jewish organizations and individuals to advance his career.

During the nomination of the ADL’s Joseph Berman for a judgeship in 2013, for example, Koutoujian privately urged a councilor who opposed Berman to switch her vote.

A Jewish leader had apparently pressed Koutoujian to do this. Had that councilor done as Koutoujian asked, Berman and the ADL would have won.

In 2014, Koutoujian and thirteen others — mostly local police chiefs — went on an ADL junket to Israel for “counterterrorism” training, which is obvious nonsense. Curiously, Koutoujian happened to be the only sheriff. A Massachusetts sheriff’s main responsibility is running county jails.

But even had the ADL never warred against Armenian Americans, it still wouldn’t qualify as a civil/human rights organization.

We can only skim the surface here of the swamp of ADL’s bad behavior.

In the 1990s and beyond, the ADL settled two civil rights lawsuits for illicitly surveilling thousands of individuals and organizations. These included the ACLU, Greenpeace, and NAACP as well as civil rights, media, anti-Apartheid, and African/Asian/Hispanic/Jewish/Native American groups.

In 1993, political strings were reportedly pulled at the last moment before a San Francisco grand jury could hear the case.

The mainstream media reported on this scandal, though not nearly enough.

In reality, then, the ADL is really just a political, rather than a civil/human rights, group. Like most Jewish organizations, the ADL believes that Holocaust denial/diminishment is anti-Semitism and, hence, hate.

By analogy, therefore, the ADL’s denial/diminishment of the Armenian Genocide would apparently make it a hate group.

The Holocaust is placed before the Armenian Genocide, even though the latter preceded the former by two decades and was a model for Hitler, who admired Turkey’s brutality.

The legislation refers to “atrocities in Bosnia, Cambodia, Rwanda, and Sudan.” Some of these, particularly those in Rwanda and Sudan/Darfur, were definitely genocides, not mere “atrocities.”

The numerous massacres of Native Americans are not mentioned.

Indeed, I suspect the text includes genocides other than the Holocaust mainly to increase its chances of passage.

Regardless, should genocide instruction as a separate unit be required when so many high school graduates have a poor knowledge of American history, not to mention the ‘Three Rs’?

By law, moreover, the Mass. Dept. of Education already has a unit on genocide which teachers can use. And some schools already invite organizations such as Facing History and Ourselves to teach genocide history.

Genocide is legitimate history, and should be included in history textbooks rather than presented as a wholly separate unit. Moreover, ANCA and AAA should not, as they did, have explicitly teamed with the disreputable ADL to support this legislation. Had they wished to support the bills, they could have done so independently.

If this legislation succeeds, the genocide-denying/diminishing ADL may well play a role in writing and teaching the curriculum. That’s outrageous.

Are schools competent to bring in outside groups to teach genocide or other subjects?

Consider the dozen Massachusetts city governments — often pushed by their so-called ‘human rights commissions’ — and the Massachusetts Municipal Association that formally approved the ADL’s “No Place for Hate” but later rejected it.

They probably didn’t bother to look into the ADL’s checkered background. Or did so, but didn’t care. At a minimum, they’re inept. Other cities and schools across America who have adopted ADL programs must also be inept.

Over one thousand cities, schools, universities, and law-enforcement agencies here and internationally participate in ADL programs such as “No Place for Hate,” “Campus of Difference,” “Classroom of Difference,” “Anti-bullying,” and more. These curricula purport to instill ‘tolerance and diversity.’

But was the ADL ‘tolerant’ of the civil rights, media, anti-Apartheid, and ethnic groups and individuals it surveilled? Far from it. Did the ‘diversity’ of genocides the ADL recognized until recently include the Armenian Genocide? On the contrary.

Are students in ADL programs told the facts about that organization’s distasteful history? Doubtful. That’s not education. It’s deceit.

Any organization that presumes to inculcate morals into young people must come with clean hands. That’s not the ADL.

Educators often fail to investigate other outside organizations and programs they bring into schools and libraries.

Some of these drag queens have been convicted of child sex abuse and prostitution.

Problematic organizations that seek to influence unsuspecting students are making schools a battlefield.

America’s future leaders should not serve as guinea pigs just so the ADL can advance its political agenda with dubious legislation.