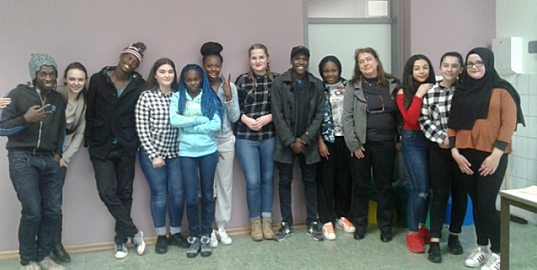 An original translation of a press release by the Dortmund Police.

As announced in press releases no. 0141, 0142 and 0144, Dortmund police formed a Kap commission to investigate after a homicide in a school at Dammwiese in Lünen.

According to the current state of investigations, the accused and his mother had an appointment with the school’s community worker. According to the community worker, the 15-year-old has a police record for violence, and was deemed aggressive and unfit for school, and had, for these reasons, temporarily attended a different school. But this measure failed, which was why he was to now attend Käthe Kollwitz school again.

While they were waiting for their appointment, the future victim encountered the attacker. According to the suspect, the victim looked at his mother repeatedly in a provocative manner. This angered the 15-year-old so much that he stabbed a knife into his schoolmate’s neck.

Before the deed, there were already confrontations between the later victim and the suspect. Investigations will have to probe whether this was the ultimate motive.

The postmortem confirmed that the violence was cause of the death. The weapon was seized at the scene of the crime.

The police records on the accused are meagre, and do not show earlier relations with the victim.

The victim’s family is being taken care of by Dortmund police’s office for the protection of victims.

The 15-year-old will appear before the committing magistrate tomorrow.

According to Dortmund police, the victim is a 14-year-old German boy from Lünen; the perpetrator is a 15-year-old boy, born in Germany, but with Kazakh and German nationality.

An article from FOCUS translated by Anton:

At a school in Lünen a pupil is said to have been killed by a classmate. A minor, underage suspect was arrested as part of a manhunt, police and prosecutors said on Tuesday morning.

The background of the crime at the Käthe Kollwitz Comprehensive School in the district of Unna was initially unclear. A murder commission has taken over the investigation. According to initial unconfirmed information, the crime was perpetrated using a knife. However, according to the AFP news agency, the police were initially unable to provide any details about the weapon used, the crime, or the identity and age of the adolescents.

Apparently the crime occurred on Tuesday morning shortly after 8 o’clock. Both the victim and the suspect are said to be pupils of the school. Priests are comforting relatives, pupils and teachers. The Kollwitz School is one of two comprehensive schools in Lünen, a city on the edge of the Ruhr area and Münsterland.

Recently the fight against child and juvenile crime had been driving regional political policy. The former NRW Interior Minister Ralf Jäger (SPD) described it as “one of the most important tasks for the NRW police”. After all, in 2016, every fifth offender was younger than 21 years old. The number has increased the second year running.

Apparently, this was an empty school which was used to house refugees.

Note: The photo at the top of this post shows a group shot taken at the Käthe Kollwitz School. There’s no indication that either the perpetrator or the victim is one of the people in the picture.

30 thoughts on “Stabbed to Death in a Dortmund School”