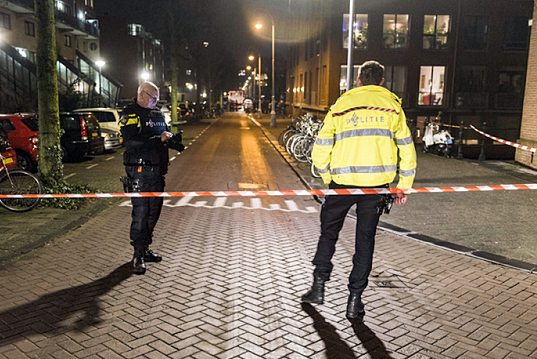 Gunfire broke out in Amsterdam this evening, leaving one person dead and two others wounded. The dead victim was a Moroccan; there’s no information yet about the ethnicity of the perpetrator(s). However, if the police suspected that a white person was responsible, you can bet that fact would splashed all over the headlines. Therefore, we may safely assume that this was enricher-on-enricher violence.

Many thanks to FouseSquawk for translating this article from Algemeen Dagblad:

[Photo caption: Police closed off the area of Grote Wittenburgstraat where emergency services are present after a shooting. ©ANP]

There is one dead in a shooting in Amsterdam. Two people were wounded. The incident occurred around 7:10pm on the Grote Wittenburgstraat on one of the Eastern Islands.

The police have spread out with large equipment and have closed the street. [The victim] was shot several times. The wounded were taken to the hospital with unknown injuries. One of them is a girl. The detectives have started an extensive investigation.

Local residents say to Het Parool that the shots rang out in the community center. The masked perpetrators appeared to have been looking specifically for the victims. The dead victim is reported to be a young man of Moroccan descent. It is the second deadly shooting incident in two months in the neighborhood. In November, a 19-year-old boy was shot dead at the Kattenburgerkade. That incident happened a few hundred meters away.

2 thoughts on “Culture-Enriching Murder and Mayhem in Amsterdam”