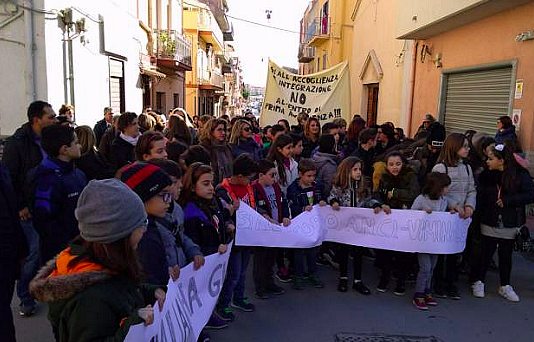 In the Sicilian town of Siculiana, ordinary citizens took to the street last week to protest the use of one of town’s hotels as a refugee reception center.

Agrigento, the town in the middle against the reception centers

In Siculiana, a small town in the Agrigento area that became the emblem of the immigration emergency, citizens took to the streets to ask for the closure of the reception center hosted in the former hotel ‘Villa Sikania’

Coming from Agrigento and skirting the town, the first Siculiana building that immediately stands out is a hotel complex surrounded by tall palm trees and a well-kept lawn and, beyond the gate, a large square and adjoining parking; it is precisely here that something becomes, in some way, out of tune: there are no tourist buses, or groups with luggage waiting to enter, but at least three police trucks that block entry and with agents who take advantage of some white gazebos to shelter themselves from the sun.

The hotel in question is the Villa Sikania, and, for the province of Agrigento, it is the emblem of how different tourist structures are converted for purposes decidedly different from the original ones, for Siculiana for four years now has represented an authentic scarecrow for the population: where for more than a decade tourists and inhabitants have been able to admire the view of the historical center of Siculiana; now it is home to one of the largest reception centers for migrants in Sicily.

It’s long and vexing, the story of Villa Sikania, a story against in which the citizens of this country place 20 km from Agrigento have descended in the square (streets): The structure is located attached to the urban center, and, in particular, next the small stadium of the locality and a small public villa a short distance from Via Roma, one of the most important arteries of the town, which unites the modern and lower part which the historic part.

The tourist business has not gone well, with the crisis correlating with the lack of a real takeoff of a sector, namely tourism, which had registered notable increases, but as yet had not succeeded in penetrating into the working and social fabric of the territory. Thus in 2012 the owner decided to turn to a different type of investment, of interest to many in Sicily as evidenced by the sad phenomenon of the aging of the population. Villa Sikania, in fact was destined to become a residence for the elderly.

The bureaucracy, however, slowed the conversion project of the structure, until however, the province of Agrigento has found itself in the midst of an immigration crisis which reached its peak in 2013 in the media due to the October 3 tragedy at Lampedusa; it was right at that moment that it was decided to turn the hotel into an initial reception center for the migrants, and since then, the structure has always reached a record number of assisted persons.

Those who took to the streets this Tuesday did not appear angry at all with the owner of the structure; the people in this deep corner of the Sicilian province, point the finger at all institutions: “Here to work now you have to focus all on immigration,” thundered a grandmother with grandchild in tow at the point where the parade left. “The State does not facilitate tourism, on the other hand the bureaucracy seemed to disappear when they had to open the center.” The event was organized by some local associations, with Mayor Leonardo Lauricella, who wanted to give the support from the administration: “We are not racist,” the first citizen has repeatedly declared, “but the center managed in this way is not a reception; it is a mass of people that creates negative problems for our economy.”

That the problem is felt was notable looking at the level of participation in the parade and the response of the traders: during the hours of the march in Siculiana, leaving from Via Roma and then reaching the front of the entrance of the Town Hall, the shutters of shops and bars were lowered, schools today did not receive children who, along with teachers, parents and grandparents were on the streets to demonstrate. Asking the reason for this feeling and why the population of Siculiana protests against the reception center, everything is brought back to the perception of security and the image that the country is creating even within the same province: “The country is full of migrants,” explains one of the promoters of the event. “It’s been four years since that time, now the situation has reached its limit; This community since the end of the 1990s has also sheltered Kosovars. Nobody can lecture us on reception (of migrants), but to see children who would rather stay at home during summer because in the villa there are groups of refugees — is not something that can be accepted.”

“Sometimes the square at the entrance to the sports field becomes a urinal,” explains a mother with a stroller in tow to our microphones. “There have never been episodes of violence, but understand well that living alone near the center, often I also avoid going out; I do not think this is a civil way of receiving (migrants) and managing this country.” The small town in the Agrigento area has appeared united in supporting the reasons for the protest. Siculiana is a small but emblematic universe, that of Siculiano formed of an area where you pass within a few kilometers from the uncontaminated beaches of the Torre Salsa nature reserve, to the rolling countryside by small hills that flank the river Canne, before reaching a town built in the fifteenth century around the castle that Federico Chiaromonte wanted to build on the ruins of an ancient Arab fort. In this small universe are concentrated merits and defects whose contrast, perhaps, feeds the charm of the province of Agrigento: breathtaking landscapes and a cultural identity that has its roots in the past, but alongside all this, even the scourges of unemployment and an emigration that threatens to blow apart entire generations.

Entering this universe and identifying oneself with those who have come down the street today, gives one the impression of being able to touch the malaise that the whole of Sicily has shown with the strong abstention in the recent regional elections. In Siculiana everyone supported the march on Tuesday, even those who did not show up in the square: “We are also opposed to this uncontrolled invasion, “it is stated in the ‘behind the scenes’ of the municipality in the ranks of the opposition. “But there is a strong risk of exploiting people’s fear, and we believe that there are also responsibilities for those who today have as their duty to manage this situation as well as possible.”

The small community of Agrigento, in asking for the closure of the reception center, seems to want in some way to claim attention from a State that seems very far away, and warned as such especially during last summer, when the residents of the Siculiana seaside areas often had to witness the flight of newly-arrived migrants on the beaches of Torre Salsa.

After the event, the village goes back to its daily life: the bars have reopened, like the last grocery shops that survived the era of shopping centers, but the restlessness among the population has remained, while a few steps from the center, the policemen under the white gazebos have continued their work staring towards the entrances and windows of Villa Sikania, the hotel turned into a reception center that for four years now has made Siculiana the community symbol of the immigration emergency in Sicily.