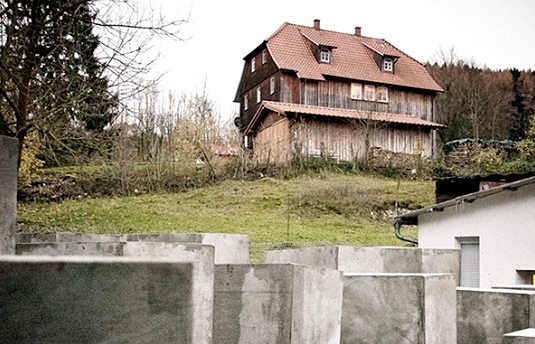 On Wednesday left activists erected what they claim is a local version of the Berlin Holocaust Memorial made of concrete stones (but is in fact, according to police, made of papier-mâché boxes) next to the private house of the AfD politician Björn Höcke.

According to F.A.Z., the activists announced that they had covertly rented the property next to Höcke’s house almost a year ago, and that they had been monitoring and observing him 24/7 ever since. If Höcke would get on his knees before the memorial in Berlin, or before their “version”, they would cease to surveil him. As for now, according to Die Welt, they were looking for more staff to surveil him.

Björn Höcke became the hate figure of the mainstream media when in a speech in January 2016, he called the Berlin Holocaust Memorial a ‘Monument to Shame’. Even in their gleeful article today, Der Spiegel fail to mention that it was their very own founder Rudolf Augstein who coined that expression for the Memorial. The press also does not care that Höcke clarified that he wasn’t criticizing the memorial, but that he, in his words, “characterized the Holocaust — the genocide of Jews by Germans — as a disgrace for our people. And I said that we Germans installed a monument to this still unfathomable crime — this guilt — in the middle of Berlin.” (Down the Rabbit Hole With the AfD, Gates of Vienna, Feb. 23, 2017).

Interestingly, the leftist activists here aren’t ashamed of (ab)using the memory of this terrible crime in a cheesy mise en scène, for the very mundane purpose of attacking a politician they hate.

The activists call themselves “center for political beauty” and have been campaigning for years to bring in more refugees.

A look at the AfD’s results in the recent elections explains why Höcke in Thuringia, Thüringen (dark blue, in the center) is a main target, and not a prominent AfD figure from, say, Schleswig-Holstein (top): 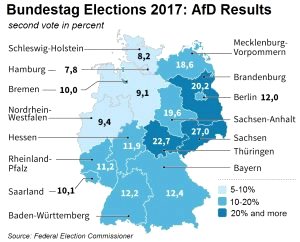 Results of the German election per state in %

There have reportedly been brawls between ‘artists’, the owner of the property they rented, and the press in the afternoon. Police have, according to F.A.Z., announced that they are protecting Höcke’s house.

24 thoughts on “The Stalking of Björn Höcke”