Update 2:35pm EDT: The perp has died, and so has a cop he stabbed. Four people are reportedly dead, but it’s not clear whether the mujahid is numbered among them.

Update 1:18pm EDT: Here’s a photo of the mujahid being wheeled away for medical treatment: 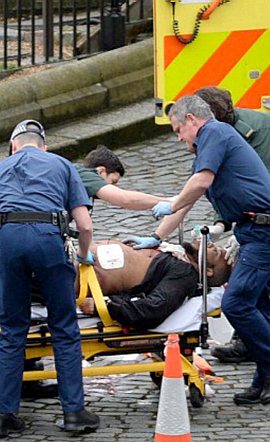 Two of the pedestrians he ran down are reportedly dead, and at least a dozen people were wounded.

This is breaking news. The headlines I saw didn’t mention whether any of the pedestrians mowed down by the vehicle were killed.

The British Parliament Has Been Suspended and Westminster is on Lockdown After Police Reportedly Apprehended a Knife Attacker on the Grounds of the Houses of Parliament.

Shots were heard late afternoon on Wednesday, with authorities confirming within minutes that the Parliament was on lock down and Members of Parliament were kept in the Commons chamber.

Less than an hour after the attack London’s Metropolitan Police declared they were treating the attack as a “terrorist incident”.

Eyewitnesses report between “eight and ten” figures on the ground on Westminster Bridge, believed to have been the victim of a car ramming attack using a 4×4 vehicle. Eyewitnesses have told how the vehicle mounted the pavement and mowed down pedestrians.

It is currently believed the driver of the car then turned the corner onto Parliament Square before getting out of the car and attempting to get into the grounds of the Palace of Westminster, stabbing a police officer along the way.

The man is believed to have been shot by police and put in an air ambulance to a nearby hospital.

Britain’s Prime Minister, Theresa May, is said to have been in the division chamber, voting after Prime Minister’s Questions, when she was whisked away by a plain-clothes police officer. An air ambulance helicopter has touched down in Parliament square after the attack, which is thought to have consisted of a car attack and a knifeman.

The police and the director of security of the House of Commons have advised the Chamber of the House to be locked down.

92 thoughts on “Car and Knife Jihad in London”