yes, you are right Ms Daisy, they came
with the wild winds of Greed, brutally
slaughtered all the innocent letters
written on the wall of Grace, even also babies
by burning them alive, before most of them
could not have a toy in their short-length life
with an insufferable last sequence

yes, you are right Ms Daisy, they were
merciless hyena droves born from
Racism, biggest evil of all times,
the bloody verses of Quran
written on the hilt of
their curved swords
feeding their violence
by promising them heaven
as they killed more “heretics”

yes, you are right Ms Daisy, they
raped little girls and young women ferociously
without caring their screeches
tearing the deeply embarrassed face of the sky
same horrific verses on their groins
and the permission of pimp epaulets
on their ignoble waists
without any mercy

now, it is hard to erase that “Barbarian” soubriquet
written on my forehead before my birth
it is hard to change to be known as savage
even I am a man feeding his ant friends
with granulated sugar at home
it is hard to explain that I have never hurt
even a wing of a sparrow
I know Ms Daisy, it is hard to introduce me
to your parents
as the man you want to live with
until infinity

The socialist Laz-Turk poet and author Serkan Engin was born in 1975 in Izmit, Turkey. 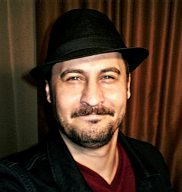 His poems and articles on poetic theory appear in more than fifty literary journals in Turkey. In 2004 he published a poetic manifesto entitled “Imagist Socialist Poetry”. He has been trying to launch a new movement in Turkish poetry, and to this end has published numerous articles about literary theory.

His poems and articles on poetry theory have been published in English in many international literary journals all over the world. His political articles on Islam and also on the Armenian, Assyrian, and Greek genocides have been published in a number of countries in many languages including Sweden, USA, Greece, India, France, Argentina, Netherland, Armenia, Indonesia and Finland.

Previously by Serkan Engin: Islam and the Christian Genocides in Turkey

7 thoughts on “Barbarian and Ms Daisy”