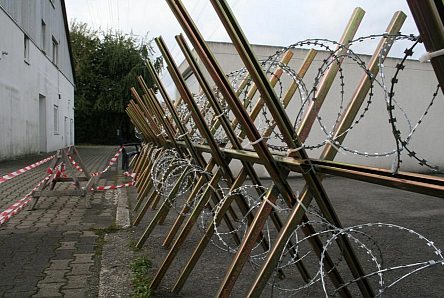 A business owner in the Ruhr town of Schwerte got tired of asylum-seekers loitering on his property, so he went all Western Front on them and built a barbed-wire barrier to keep the invaders out. The municipality is not happy with him, but I took a liking to the guy when I read his only comment: “I don’t talk to the press.”

Many thanks to Nash Montana for translating this article from Ruhr Nachrichten:

Steel pipes and NATO-security razor-sharp barbed wire: With a fence straight from a war zone, a company in Schwerte-Ost seals itself off against a neighboring refugee home — because the refugees were loitering on the property for better cell phone reception.

The city is still examining on how to proceed with zoning laws and regulations against the “structure”. The martial structure blocks a carport and a garage which until now had only been accessible via city-owned property.

The city bought the adjoining property a year ago and converted it into an home for asylum seekers. Roughly two dozen asylum seekers live in the home.

Jutta Pentling from the complaints department at the courthouse has no words: “Something like this just has never happened in this administration. We are now examining what we can do and what we must do.” First and foremost, a barrier tape has been put up to prevent refugees from getting too close to the border structure.

The volunteer helpers at the asylum home are indignant and horrified. Because the city didn’t furnish the asylum home with wifi, the inhabitants have to be creative when they want to maintain contact with their families in their home countries. Therefore it only took a few steps onto the neighboring property and wifi connections were improved.

Rolf Siegel is one of two CEO’s of the long-established steel company Hesse. He first tried to have conversations with the inhabitants of the home and with the city’s social workers responsible for the refugee home, asking them to forbid further trespassing on the company’s property. The workers themselves confirm they warned their protégées multiple times not to trespass on the property.

But all that didn’t help. And so, deeds followed words — criss-cross steel pipes and rolled out barbed wire were applied a few days ago. The martial structure is blocking a carport and a garage which had only been accessible via city owned property anyway.

City wanted to build a fence

Jutta Pentling said that a representative for the city had immediately tried to talk with Rolf Siegel about whether the city could perhaps build fence at their expense, but Siegel rejected any conversations. Pentling says that the city will not accept the barbed wire structure. The inhabitants of the city-owned asylum home, men from Syria, Iraq, Iran and Afghanistan, are bewildered and perplexed. That someone would put barbed wire in front of their feet is beyond their comprehension.

Rolf Siegel later informed us that he is “generally not in the habit of talking to the press.”