This article from Rhein Neckar Zeitung describes the travails of a culture-enriching bus driver in Germany who was thrust into the job with zero knowledge of the city’s bus routes.

Mannheim. One bus driver waits for running passengers, another doesn’t. One driver helps the elderly getting in, another one complains. Business as usual. But a bus driver being sent into the race completely ignorant of his schedule and his route is a new phenomenon. One reader told the RNZ about this very peculiar incident that took place in the late morning of August 26th.

“Even as I entered the bus, there was already a commotion. The passengers said the driver didn’t understand German and that he didn’t know the route,” Andre Holzheimer, who uses the line 710 regularly, explained. The line commutes between Brühl and the Mannheim Main train station and then goes back via Mannheim-Rheinau all the way to Schwetzingen-Hirschacker. 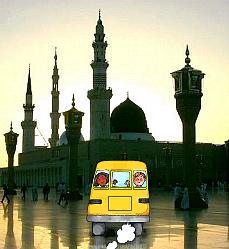 “The poor man was drenched in sweat and said that this was his first day as a bus driver. Apparently they just sent him off without any intensive training. I felt sorry for the man, who was obviously of Arab background. We had to keep telling him where the stops were and where he had to stop,” Holzheimer recounted. “The whole thing was reminiscent of a scavenger hunt.” Furthermore it was “the nastiest bus in all of Mannheim,” with numerous defects visible to the eye.

But what at first glance looked like sloppy employment soon revealed itself as an attempt to spare the bus passengers an even worse fate. “The commissioned subcontractor who supplies us with drivers was acting out of pure emergency,” Reinfried Vetter, Heidelberg chief comptroller of the BRN, justified the incident.

The 710 bus, returning from the Mannheim train station and heading for Schwetzingen, unfortunately ended up stranded at a road construction area and was late by more than 20 minutes. In order to avoid complete cancellation of the bus service, the subcontractor found a replacement driver and bus at the last minute,” said Vetter.

Normally there aren’t any problems with this subcontractor, whose name Vetter did not want to give on the record. All subcontractors have to prove route training for their drivers. Whether the bus driver — who probably won’t so quickly forget his first day on the job — will receive appropriate training is not known.

10 thoughts on “The Wayward Bus”