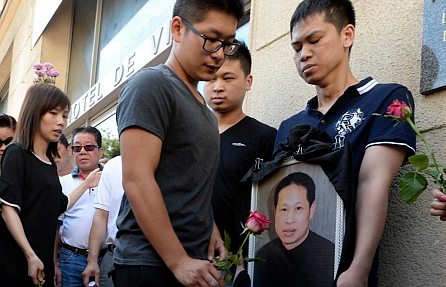 This article doesn’t mention it, but anti-Chinese attacks in France are more and more frequently the work of Muslim culture-enrichers. Many thanks to Ava Lon for the translation:

In Aubervilliers, Asians are organizing to ensure their safety

A week after the murder of a Chinese in Aubervilliers, north of Paris, after suffering daily attacks, the community decided to react.

A dozen men gathered on August 15 in a restaurant in Aubervilliers, north of Paris, eyes glued to their mobile phones. They stood ready to intervene if a member of the Chinese community were to be attacked in the vicinity.

One of them, Yvon Sun, was himself attacked four times last month. “In all areas of La Courneuve and Aubervilliers, the Chinese are daily victims of aggression and violence,” he reports.

The Chinese community in North Paris then proceeded to organize themselves. Now, they never go out alone, explains Charly Shen. “In this group, we will try to return home together, we’re going to pick up each other at the subway station to avoid being attacked,” he explains.

The Chinese community in France is angry, over a week after the deadly attack on a 49-year-old Chinese man in Aubervilliers. The man fell at the hands of three men in the street. It is far from being an isolated case. Racist attacks against the Chinese have been multiplying for several months. They therefore organized themselves to provide better security for their movements.

Rui Wang, a spokesman for the Association of Chinese youth of France (AJCF),says that Asians represent an easy target because they are victims many clichés. “They think that the Asian is an safe and easy target, and so they’re attacking him, he says. At first we joked on ‘the other’, we attacked in words. Gradually it comes to actions. Today, the first drops of blood were shed. We would not want others to suffer the same fate tomorrow.”

A petition on the Internet to denounce the anti-Asian attacks had collected 9000 signatures as of the evening of August 15.

62 thoughts on “Open Season on the Chinese in France”