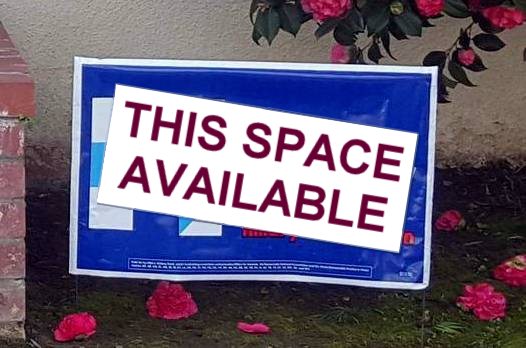 I drove Dymphna to a routine doctor’s appointment this afternoon. It’s a little over an hour from here, and we passed the time reading the election signs on people’s lawns. There were lots of signs for local candidates in the counties we passed through, and also the congressional candidates in two different districts. And the Trump/Pence signs are sprouting everywhere, like mushrooms after a big rain.

But we saw no Hillary signs. Not a single one.

Mind you, we live in a Deplorable Zone — lots of hidebound bitter clingers in this region. But still — you usually see signs for the Democrat in certain socio-economic areas. Especially in black neighborhoods, where signs for the Democrat presidential candidate normally proliferate. And this has been true in the past not just during Obama’s runs, but also for all the honky candidates — Clinton, Gore, Kerry, etc.

But not this time. I don’t think I’ve seen a Hillary sign yet anywhere.

The next time I go into Charlottesville — which will be fairly soon — I’ll watch for them there. C-ville is a notoriously progressive town — Dymphna calls it “Berkeley East”. Back during the Bush Derangement Syndrome years, you risked getting your car keyed if you parked it there with a Bush sticker on the bumper.

I bet I’ll find some diehard Hillary supporters there.

7 thoughts on “Picture Your Ad Here.”