Hungarian Prime Minister Viktor Orbán’s party, Fidesz, is sometimes referred to by the foreign press as “neo-fascist” because it is nationalist. These journalists are forgetting the fact that there really is a neo-fascist party in Hungary: Jobbik, which is distinct and different from Fidesz, a traditional nationalist party.

The following article from the Austrian daily Die Presse gives an account of Jobbik militias in Hungary and Bulgaria. Until I read this, I didn’t know there was a branch of Jobbik in Bulgaria. It would have been useful if the author had made more incisive inquiries — such as: how these militias are regarded by their governments, how much support they receive from localities, and whether they undercut the popularity of the governing parties. 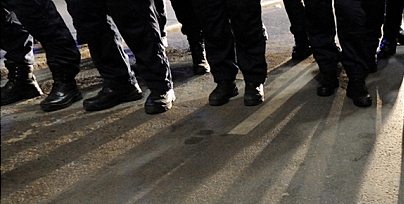 Photo caption: The Hungarian Guard is banned. But its members are still marching.

In Hungary and Bulgaria, civil defense units are patrolling “to protect” the population from immigrants. A report on violent “immigrant hunters” and “healthy walks”.

Budapest/Sofia. In front of the local McDonalds in Gyôr, western Hungary, a burly Iraqi is negotiating with a group of immigrants. “That’s a smuggler,” says Miklós (name changed). With some physically well-conditioned friends, he approaches the establishment. The immigrants disappear in a flash. “They know us,” says Miklós. When the Hungarian Guard — the currently banned militia of the right-wing Jobbik Party — was founded, he was one of the first on the spot.

After work, he and ca. 40 like-minded companions move in varying routes through the town, watching for immigrants from the nearby refugee camp, Vámosszabadi. “We talk to them, ask them what they are doing here,” says Miklós. “We try to explain that the rules are different here than where they come from. For instance, how you treat women.” Then “we escort them to the stop for the bus that goes back to the refugee camp.”

Two women belong to the group. One of them is Melissa Mészaros. She tells about being groped at work by a Palestinian. “He was drunk.” The participants call their rounds “healthy walks”. One of them is in the army. Another is a ranking functionary of the local Jobbik Party. He is the true organizer of the “walks” and does not want to be named. His function in the party must also not be mentioned, since this has nothing to do with the party. “Because I am not doing this as a politician, but as a member of the guard.” Most of the participants were previously guard members, and the regard themselves as still in service, even though the guard has been dissolved. “Walks” like this are also taking place in other cities and towns. “The guard is still alive.” “Obviously, the local chief of police knows us, but he looks the other way,” Miklós says. They have never beaten the immigrants up. “There is frequently tension, though, when we speak with them.”

Jobbik party chief Hristo Atanasov is a cook in the Bulgarian port city of Burgas. On the weekend, he puts on military clothes and drives to the woods on the border, with ca. 20 like-minded friends. “We just walk along there,” he says. But they tell the police what route they will be taking, and they keep an eye out for immigrants. They are a “patriotic organization” — “The Organization for Protection of Bulgarian Citizens.” The 33-year-old hastens to say that everything is done legally. “Not like Dinko or Perata. They beat up the immigrants, rob them and send them back.”

A Bounty on Refugees

Dinko and Perata are notorious “immigrant hitters”, who have dominated the news in Bulgaria since February. It began with Dinko Valev — a brawny guy who likes to ride around in the woods on his ATV. His story is that one day in February, he was attacked by an immigrant who wanted to steal his vehicle, and laid him out with a couple of good hits. Then he did the same with other immigrants who suddenly came at him out of the underbrush. Then he called the police.

Overnight, he became a superstar in the Bulgarian media, sounding off on all TV channels — immigrants were terrorists and would destroy Europe and Bulgaria if people like him, Dinko Valev did nothing to stop it. Since then he has “caught” at least 25 immigrants, inspired a wave of imitators, and is demanding that the government pay €25 per captured refugee. Money is paramount with him. He asks €500 for an interview. Of course, that is out of the question, because it would be journalistically unethical. Other journalists report similar demands.

But mostly in Hungary and Bulgaria, what happens on these patrols is… absolutely nothing. They tell each other how important it is to defend the homeland. The guard members in Gyôr are unanimous that “the immigrants are an invasion.” The police are not protecting citizens — “People are afraid when it starts to get dark.” Sometime, they hope, the guard will be official again. Until then, they walk through town in uniform.

19 thoughts on “Citizen Militias in Hungary and Bulgaria”