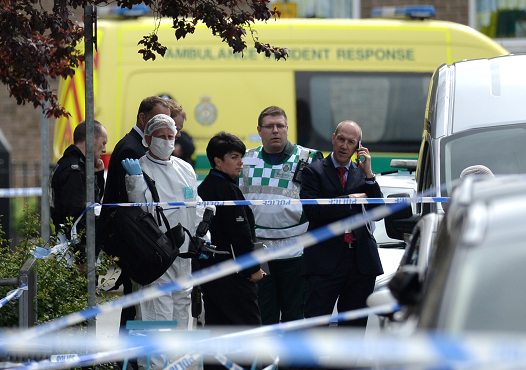 Birstall is a southwestern suburb of Leeds, near Dewsbury, in West Yorkshire. This morning a Labour MP named Helen “Jo” Cox was attacked as she arrived at her constituency “surgery” at a library in Birstall. She was shot three times and repeatedly stabbed, and died later on after being taken to the hospital. Her attacker, a local man named Thomas Mair, was immediately apprehended by police.

Ms. Cox’s constituency is fairly culturally enriched. As a result, a number of witnesses to the crime were Muslims. One of them told the media that he heard Mr. Mair shout “Britain First!” as he attacked the MP. This immediately made headlines in the British media, and the race was on to blame Brexit supporters for the death of Jo Cox. She was not an avid supporter of Remain, but she did favor remaining in the EU, so the accusation had legs.

Later on the Muslim witness retracted his statement, and other witnesses confirmed that the attacker had been silent while he was shooting and stabbing his victim. Thomas Mair has a history of mental illness, and had been under treatment for his condition. Those who know him say that he has no political leanings.

So the “Britain First” story had no merit; it was completely refuted. But by then it had been injected into the Narrative, and had spread throughout the MSM and social media. It was further reinforced by the fact that all the major UK media outlets shut down the comments sections on their websites for the duration of the crisis, freezing in place the meme-of-the-moment about the pro-Brexit murderer. The last time I checked, The Daily Mail’s story from this morning still carried a headline with the “Britain First” slur.

The EU referendum is just a week away, so the timing of all this hysteria is significant. Obviously, a culture-enriching Labour-supporting pro-Remain bystander availed himself of the opportunity and decided to do damage to the Leave camp with a carefully-timed falsehood.

Did he think it up himself? Or did he get a quick text from higher-ups advising him to include the “Britain First” shout in his eyewitness report? We’ll probably never know the answers to these questions, but there’s no doubt that he and his fellow Labourites took a page from Rahm Emmanuel’s playbook, and decided not to let this crisis go to waste.

It reminds me of the media swarm surrounding the shooting of Rep. Gabrielle Giffords (D-AZ) by Jared Loughner in Tucson back in 2011. Almost before Ms. Giffords had been loaded into the ambulance, the tweeters and posters of the Left had pegged Jared Loughner as a conservative and Tea Party supporter. Later it emerged that he was a schizophrenic with a progressive political bent — an Obama supporter, no less. But by then it didn’t matter — the meme was established.

I’ve been exchanging emails off and on all day with our English correspondent Seneca III. He told me he hoped I would write about the political exploitation of the murder of Jo Cox, and I told him I needed the help of someone who knows the turf. So he sent me this final email, and asked me to post it for our readers:

Something wicked this way comes — the near death of a people

The Breitbart story contains the detailed facts that the perp was a known psycho with no political leanings. Combine this with the following also found in that article and elsewhere:

All in all that leaves The Brexiteers in a difficult position should Cameron try to postpone or cancel the referendum on the basis of this tragedy. He and his globalist sycophants and EU masters are desperate and capable of anything.

And that brings me to my greatest fear, because I know the turf as you called it, and that turf is my people. I have been taking their patriotic temperature daily for the last few weeks and it is as high as I’ve ever known it.

I just want out of the EUSSR, not a civil war at any level, and that is exactly what Cameron could initiate if he pulls any tricks. He in his privileged ivory tower knows far less about the real temper of my people than this hypothetical character did.*

There could be blood. I want to put a stop on it before that scoundrel even has time to take any instruction from the Bilderberg villains.

Please ask your readership from me if they would be kind enough to bounce this on to any Brits they know, and then ask them to do the same, with my heartfelt and eternal thanks to you and all of them.

60 thoughts on “Death in Birstall: A Crisis That Did Not Go To Waste”