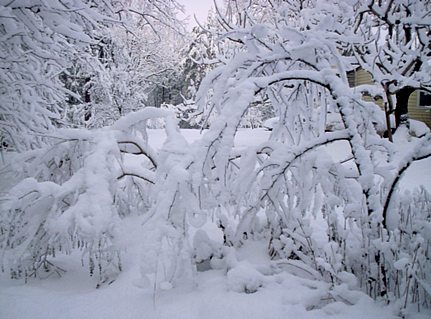 Somewhere there are people betting on the final accumulation from this storm now — at last — upon us. Or they’re making book on which area ends up with the most snow. Or, like the Baron, they’re outside putting up markers to indicate the final depth at their own house.

[A thing one might like to know about the Baron: he’s an excellent jury-rigger. In this case, he has taken my garden dolly (used to haul bags of soil amendments and such during the other three seasons of the year) and marked it with bright pink masking tape at various measured intervals. It has been placed so as to be visible from the kitchen window and securely weighted down with a heavy rock taken from the garden border. Now, instead of traipsing outside to a sheltered area to measure, he has only to look out the window to see at one glance the depth of our misery accumulation here at Schloss Bodissey.]

Weather definitions are a good use of Wikipedia. It’s difficult to politically polarize (no pun intended) set meteorological events — in this case, “nor’easter”. Which is why a wiki can be invaluable in this case, yet so utterly useless and out of its depth in other areas.

The most recent example came from someone in the comments who mentioned the citation of the Center for Security Policy as a source of information. Unaware of Wikipedia’s infamous reputation as a leftist mouthpiece, he cited its dismissive commentary on CSP.

According to the Wikipedia entry, CSP is not to be trusted. Why? Because it has fought (successfully) to establish the truth of CAIR as a Muslim taqiyya operation, and earned a special place of honor for being the first foundation courageous enough to call out Grover Norquist, an American soi-disant “conservative” who uses his connections with powerful people “inside the Beltway” (the inner ring of roadways nearest The Capitol) to funnel Muslim Brotherhood operatives into positions of influence within the permanent federal bureaucracy.

Thus, Wikipedia is worse than useless for those of us on the right side of the political spectrum. At the same time, it is invaluable for (non-politicized) scientific information. I wouldn’t trust its views on our polarized “climate change” but when it comes to describing the science behind a thousand other things, there is no better quick source. I bracket the politics of Wikipedia and use its definitions to inform/remind/clarify for myself on a myriad of subjects.

And so we come to the wiki about what is coming our way in the next forty-ish hours: 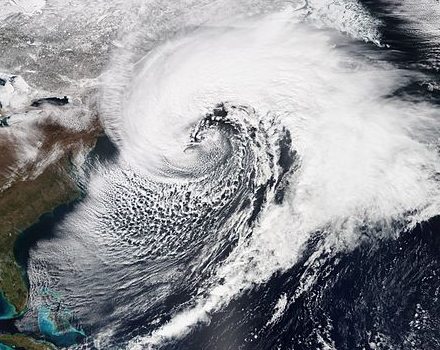 A nor’easter (also northeaster; see below) is a macro-scale storm along the upper East Coast of the United States and Atlantic Canada; it gets its name from the direction the wind is coming in from the storm. The wind on land, therefore, will generally blow from the northeast.

The usage of the term in North America comes from the wind associated with many different types of storms, some of which can form in the North Atlantic Ocean and some of which form as far south as the Gulf of Mexico. The term is most often used in the coastal areas of New England and the Mid-Atlantic states.[my emphasis — D]

A nor’easter is a low pressure area that often passes just off the New England and southeast Canada Atlantic coastline. Winds in the left-forward quadrant rotate onto land from the northeast. The precipitation pattern is similar to that of other extratropical storms. Nor’easters can cause severe coastal flooding, coastal erosion, hurricane-force winds or blizzard conditions; these conditions are usually accompanied with very heavy rain or snow, depending on when the storm occurs.

Nor’easters thrive on the converging air masses; that is, the polar cold air mass and the warmer oceanic air over the Gulf Stream.

In the present case, unlike the more typical nor’easters, this “Winter Storm ‘Jonas’” has been pulled up to the mid-Atlantic coast from the Gulf, but instead of moving along to New England where it belongs, the sturm-und-drang is going to settle its big fat behind right down in the mid-Atlantic states, with only the barest fingers reaching as far as New York. It could spread a bit into Pennsylvania but the usual victims — New York City and New England — will have the pleasure of being mere spectators. However the coastlines — e.g., Long Island and such — will experience tidal surges associated with the outlying winds.

The largest cities to be hit are as far north as Washington D.C. and Baltimore, Maryland. For certain they will both be paralyzed, messy, and frozen. There are sure to be a few idjits who insist on getting out in their four-wheel-drive vehicles to see how far they can get before turning around — or attempting to turn around — to head for home.

It is during these storms when I feel sorry for police and emergency crews: they have to tend to the consequences of the idjits, not to mention the babies who will insist on being born. There are not yet any fetal forecasts allowing them to make more informed decisions.

For Schloss Bodissey the big questions are (a) when will we lose power? and (b) how long will we be ‘out’? We don’t live in an area of “sure snow” but rather in the place where there can often be a divide marked “mixed precipitation”, i.e., rain, sleet, ice and snow: inches and feet of ‘snizzle’. Things are sure to be dicey: the National Weather Service has posted helpful directions on how to measure ice accumulation. However, it appears that for this storm the ice divide is further south — as in “fifty miles further south”. Ugh. That’s a bit close for comfort.

Those of our readers who have been around for a while know that a few years back we used the proceeds from one of our quarterly fund raisers to install a gas line and traded in our electric stove for a gas cooker. Now, when it’s blowy and snowy outside and electric lines running down the mountain are struck by trees or overloaded with ice, we still have warmth. (Yes, of course we’re careful about carbon monoxide build-up.) The only downside to the stove is the slight amount of heat the pilot lights give off in August. But that’s a small price to pay for heat in January!

It could be that no trees fall on the electric lines, nor any ice weigh them down. And it could be the snow is so dry that none of it melts into the terminals (or whatever they’re called) carrying our cyberspace connectivity via the phone lines. Given our experience, those are two rather large conditionals for this situation. Some estimates are for thirty+ inches of snow in the next forty-eight hours…

There is always the chance of learning something new, isn’t there? Until a few days ago I had no idea there were people who made their living as “agricultural forecasters”. Vineyards, farmers, landscapers, etc., need accuracy year round in order to protect their cattle, crops, and customers’ expensive shrubbery. It won’t surprise you to learn that these agricultural meteorologists have a much better track record than the governmental trackers. The latter get paid whether or not they’re accurate whereas the agricultural forecasters can only stay in business if they’ve accumulated a record of stellar accuracy. Thus, this time, while the national weather service was saying Richmond would have rain, or that Richmond would receive six inches of snow, the agricultural fellow was sneering at their folly, calling for two feet of snow in Richmond.

He uses a combination of the “European” model, GFS, and something from Canada called the RGEM, to concoct a brew which usually tracks reality — though with the usual provisos. And sure enough, as time went on the governmental weather guys began to hew closer to his ideas.

No, I have no idea what the various ‘models’ are but here is a good site for a variety of explanations of Atlantic phenomena. The science-minded among us — and there are lots of you — may enjoy reading the differences among and between those meteorological representations. Once beyond Global Forecast System (GFS), I’m lost. That’s when I look to the agricultural forecaster in central Virginia.

Time to start a pot of soup, eh?

34 thoughts on “Nor’easter Has Arrived”