The following article about last week’s incident in the Persian Gulf was published on Monday by Dr. Rich Swier in a slightly different form. 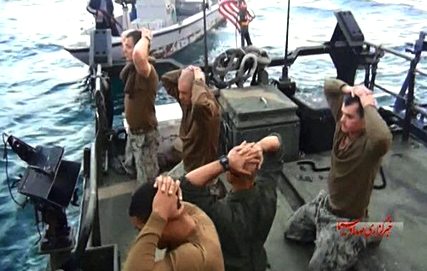 Will the Farsi Island incident turn out to be a cover-up like Benghazi’s?

By Wallace Bruschweiler and William Palumbo

Since Tuesday’s capture of U.S. Navy sailors by the Iranians, many questions have emerged that call into question the official story of events. Knowing the history of the Obama administration, including the Arab Spring and the infamous attack and cover-up Benghazi “incident,” is it fair to assume that the White House is again deceiving the American public?

In light of yet another disgraceful situation that humiliated our country and military, below are some vital and important questions to ponder (forget political correctness!):

At first, on the surface, this sordid affair is not unlike another major scandal of the Obama administration: Benghazi. Again, consider some important questions:

Now that the Farsi Island incident is over and with the focus shifting to the latest prisoner swap, who will be the “schmuck” who throws her hands up and screams “What difference, at this point, does it make?”

12 thoughts on “Farsi Island: What Difference, At This Point, Does It Make?”